FOOTBALL: BEING labelled as one of the brightest young managers outside the Football League is a tag Liam McDonald is quick to play down, but as he embarks on the next stage of his managerial journey at Solihull Moors, it is easy to see just why he was the man selected to fill the big gap left behind following the departure of Marcus Bignot.

Players, staff and fans were left shocked when popular character Bignot confirmed his departure to League Two side Grimsby Town at the beginning of November.

Nobody could begrudge the former QPR full-back a move away from Damson Way having guided Moors to the top flight of non-league football, but they were big shoes left to fill.

Former Redditch United and Hednesford Town manager McDonald got the nod and he is well aware of the impact his predecessor has made.

“Marcus has done a great job here in getting the club promoted,” McDonald told the Observer. “He’s left Moors in a very good position.

“I’ve been in speaking to him before and after I took on the job. He’s there to pass on information to me because he’s done a fantastic job here at a club he loved.

“I want to carry on the good work that he has done and then see where we are come the end of the season and see what the next jump up is.” 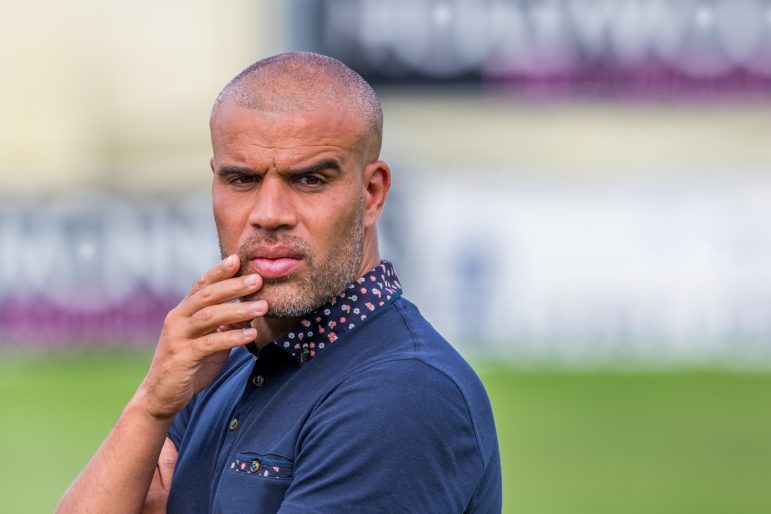 Former Moors boss Marcus Bignot was a popular figure at the club. (s)

Both McDonald and Bignot share similar characteristics, but one that stands out in particular is their ambition.

Like Bignot, McDonald is aiming high and wants to manage at the highest level possible, but first and foremost he is determined to make a name for himself amongst the Moors faithful.

“I’m up for the task. I’ve been successful at every club I’ve been at and now I want to breed a winning habit here at Solihull.

“I know we’re not going to win every match and I know how difficult this league is but I’m excited for the challenge and there are some big games coming up so we’ll need to learn quickly.

“The club has their ambitions and as players and coaches we always want to aim higher.”

“I’ve always wanted to be a football manager and I’ve never made it a secret of how ambitious I am. At 27 I put myself on a journey and everything I have done as all been part of my development.

“I was at Redditch for three seasons and I recently spent five months as Hednesford and now my sole focus is managing Solihull and keeping them in the National League.” 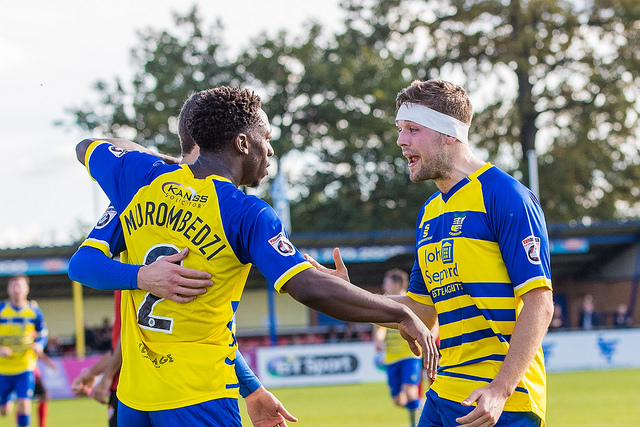 McDonald enjoyed a playing career at Worcester City, Hednesford, Barwell, Kettering Town and Tamworth before eventually arriving at Redditch where he played until he was 27.

As manager he spent three years at Redditch where he transformed the club into Evo-Stick Southern Premier League contenders, losing to Leamington in the play-offs last season and lifting the Worcestershire Senior Cup along the way.

A move to recently relegated Hednesford followed back in May and he guided the Pitmen to the top of the Evo-Stik Northern Premier League, which was enough to alert Moors who were quick to make their approach.

“I had been speaking to Moors the week before I was announced as manager but I still felt a loyalty to Hednesford so I wanted to remain in charge for the match against Stafford Rangers.

“They gave me an opportunity in the summer and Solihull understood that. I’d only been there five months and I didn’t want to leave them out in the dry.

“We (Solihull) had an informal chat about the position and where the club wants to be and I was impressed. Our ambitions matched and I was pleased to hear about what the club has got planned in the pipeline and where they want to progress.

“I wanted to know what the club’s ambitions were and they can see past just playing at this level, but the flip side of it is that we’re in the National League and it’s going to be very tough.

“The decision was 80 per cent made in my head after Solihull approached me and when I went home to speak with my family I was comfortable with my decision.

“I’m confident in the long term vision of the club and I have the confidence in myself and the ambition to take Solihull forward.”

Joining the Moors alongside the manager will be his assistant Nick Green and coach David Bridgwater and one man who McDonald is looking forward to working with his former Birmingham City star Keith Bertschin, who arrived at Moors as first team coach just a couple of days before McDonald’s arrival.

“Keith is well known in the football world and has worked with managers at the top level. He’s someone I am hoping to learn a lot from him while we’re both at the club.

“He’s been a massive help so far, especially when it comes to training because I’m a very hands on manager – I like to watch games, scout players etc

“If there’s anything Keith needs to add in after team talks or training he’ll pull players to one side and have a word. I’m the manager but he can talk to individuals.

“We’ve got a good team in place and we all trust one another which is important to me. I need good people around me and Keith is certainly one of those.” 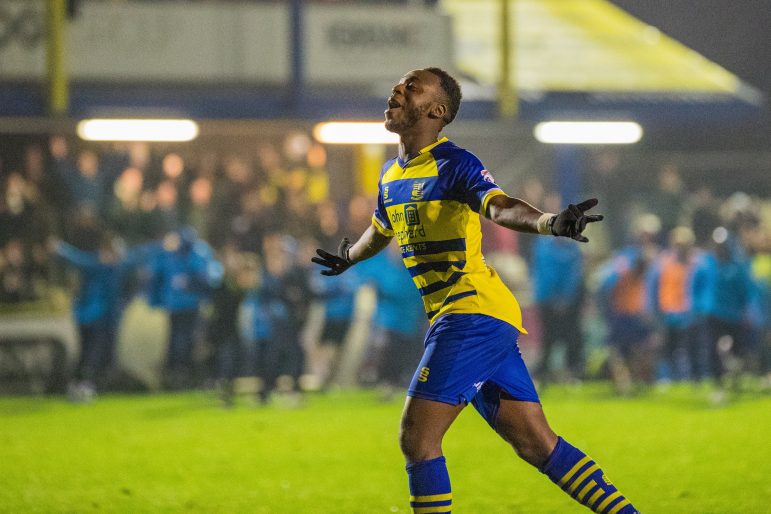 Solihull Moors progressed through to the second round of the FA Cup after beating Yeovil on penalties. (s) Photo by Steve Feeney

As far as managerial debuts go, an FA Cup first round replay against League Two side Yeovil was perhaps as difficult as they come, but McDonald does not feel he was thrown in at the deep end.

“I don’t think that’s the case. I was asked if I can go and get us through against Yeovil or asked if I wanted to sit it out.

“I didn’t feel it would harm preparation because I shouldn’t have to motivate the players for an FA Cup home replay against Yeovil for a place in the second round.

“We were all very excited beforehand and we were expecting a tough game but we stuck to our game plan. We went with a formation that I’m most comfortable with and they believed in it – they accepted it.

“It was a great night but I don’t think I celebrated at the final whistle. I just went over and shook the other manager’s hand and went back to the changing room.

“The lads deserved to celebrate because they got everything they deserved and you could see from their reaction and the reaction from the fans how much it meant to everyone involved with the club.” 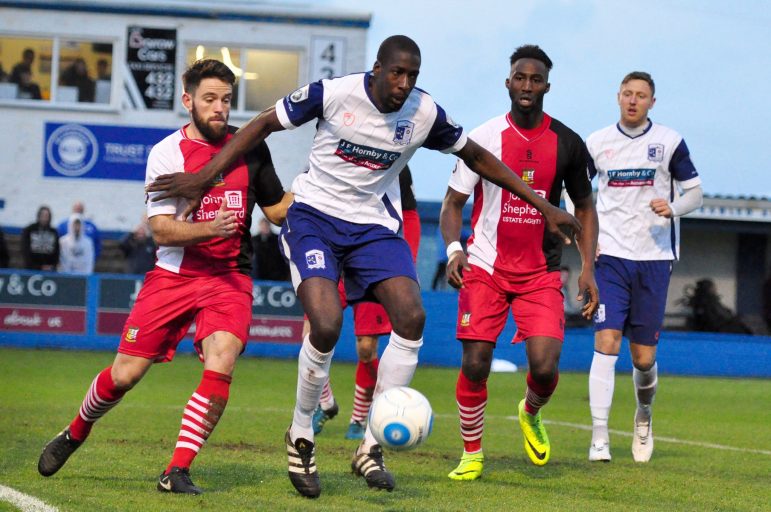 It has been a busy week for McDonald in his first full week in charge and despite tasting back-to-back league defeats away at Barrow and Torquay United which leaves Moors five points away from the relegation zone, he is confident the results will come sooner rather than later.

He added: “I’m still getting to know a number of players and it will take a bit of time for them to get used to my way of thinking.

“The players have been great to work with. They’ve embraced what I’m trying to put across and that’s difficult because it’s going to be different and they’re getting used to the way I work.

“These players are enjoying the fact that they’re playing in the National League for Solihull. We’ve got a good mix of youth and and experience in the dressing room

“When we do get to know each other I think the lads will be excited by what I want and I’m confident we can have a good season as long as we all work hard.”