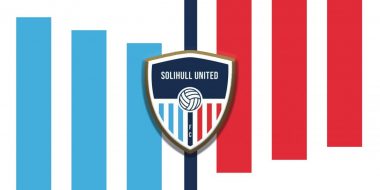 FIRST-HALF goals from Miracle Okafor and Kyle Hudlin sent Solihull United on their way to a seventh victory of the season and maintained their seven-point lead in Midland League Division Two after seeing off Boldmere Sports & Social Falcons 2-1.

Saturday’s victory maintained the Young Lions unbeaten record this term, despite not reaching their usual performance levels at Boldmere Road.

Sam Manoochehri’s men struggled to get out of the blocks initially against their lowly hosts, with Tom Parsons brought into action in the early stages to claw away a header following a Falcons corner.

Hudlin was the man to bring his side into the contest, seeming to enjoy the battle with his former teammates, when drawing a save from distance to register Solihull’s first effort on target.

Chances began to arrive more frequently from then on in, with the next opening proving one of the most decisive moments of the afternoon.

Bursting through on goal, Josh Parsons looked likely to go all the way and score the opener before his run was halted illegally by Boldmere ‘keeper James Wilson – leaving the referee with no choice but to point to the spot. 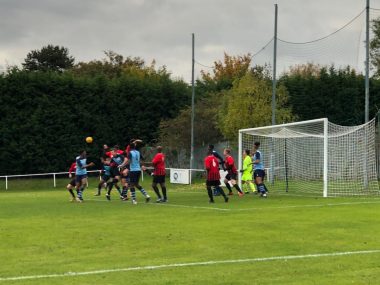 Action from Solihull’s victory in Boldmere.

Okafor was the man to assume responsibility, stroking United into the lead on 25 minutes.

The Falcons were fortunate not to fall further behind after a handful of close shaves, all coming from Harry Eden, which narrowly evaded the hosts’ goal.

Boldmere were rewarded for managing to hold on, and brought themselves onto level terms when Myles Phipps evaded the Solihull defence to score nine minutes before the break.

Fortunately for Manoochehri, his side did not bow to the setback and instead resumed their lead on the stroke of half-time when Hudlin picked out the back of the net in fine style from 16 yards.

And it could have been better still for the visitors in stoppage time, as Okafor tested the shot-stopping of Wilson.

United ideally needed another to make the game safe, with Boldmere remaining a threat despite the deficit facing them.

But what followed was perhaps a reflection of the desire from both sides to decide the match in their favour, in a half strewn with fouls and a total of six bookings in all.

To the Young Lions credit, they gave Boldmere a taste of their own medicine as far as physicality was concerned – despite their tender years.

And while chances were at a premium throughout the second period, the last blast from the referee’s whistle meant the final scoreline was a fair reflection of proceedings.

The Millers have had a steady start to the season with three victories, a draw and a loss having only played five league games to date, winning their last two by a 4-3 scoreline against FC Stratford and Lane Head.