You have to build momentum - Ardley after Bees stalemate 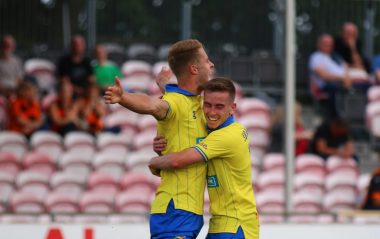 Andrew Dallas, left, is greeted by an ecstatic Joe Sbarra after netting the opening goal. Picture by Richard King.

A REMINDER was sent out by manager Neal Ardley to his Solihull Moors side to build up a head of steam in the league, in the wake of last weekend’s 1-1 home draw with Barnet.

Moors have drawn both of their opening National League fixtures to open the new season, but, while a stoppage-time equaliser granted them a point in their Wrexham opener, it was a late goal conceded by Solihull that resulted in another stalemate last time out.

Andrew Dallas was on hand to stab home a 41st-minute opener to reward the hosts for their impressive first-half performance, but failed to build on that foundation after the interval before eventually being pegged back by the Bees’ Daniel Powell ten minutes from time.

For Ardley, who witnessed his side create numerous chances to secure the three points at the SportNation.bet Stadium in the second half, the lack of cutting edge was always going to prove costly – he sensed.

“I felt all game like we needed the second, 1-0 is obviously always a dangerous scoreline,” said the 48-year-old.

“As the game was going on, we had a spell where we were on top and forcing their ‘keeper to make a number of saves, and we could have done with another goal to settle it down.

“But the longer the game goes on, the more they [Barnet] are going to stick at it – and they had their one moment.

“We still need more momentum, you don’t just start the season with it – you have to build it – and we haven’t quite done that yet with our performances.

“But with what we have in the dressing room and the players we have coming back from long-term injuries, we have a squad capable of being at the top.”

Moors return with a third successive home game this Saturday against Weymouth – who won at the third attempt against Maidenhead United on Bank Holiday Monday following two previous losses.