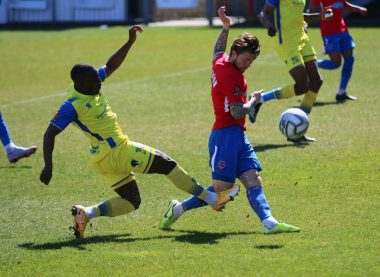 Moors’ latest recruit Alex Addai, left, was in the thick of the action. Pictures by Richard King.

MANAGER Mark Yates has challenged his Solihull Moors side to embark on another run of form, after their previous five-match unbeaten streak was put to an end in last weekend’s 3-2 defeat at Dagenham & Redbridge.

The arrival of the 51-year-old in the Moors hot-seat last month has instigated a turnaround in fortunes for the club, overcoming an initial three-match winless run to record four wins in the five games that followed.

And while ten-man Solihull were unable to extend that record to six matches at the Chigwell Construction Stadium last time out, despite taking the lead through Jordon Cranston in the 11th minute, plenty of hope will remain for a strong end to the season in the ten games that remain – starting with Saturday’s home game with Yeovil Town.

George Saunders pulled the Daggers level just before the half-hour mark, before Angelo Balanta’s penalty and a Matt Robinson strike either side of the break stabbed a deep wound in the Moors armoury.

A straight red for defender Tyrone Williams 14 minutes from time left the visitors deeper in the mire, although Adam Rooney netted a late consolation in the fifth minute of stoppage time to reduce the arrears.

Yates was understandably left dismayed by the final result in East London, but could still return home full of confidence thanks to the application of his battling team.

“It was disappointing that we stopped the run,” he said.

“I thought we started great and were positive, scored a good goal and had a couple more really good chances.

“And then we’ve conceded three sloppy goals in a mad 15 minutes.

“But there was lots of pleasing stuff, I said to the lads that all it changes is that there’s a game less to get the points that we want to get – I don’t want them to beat themselves up as they worked really hard.

“There are things that we’ve got to learn and do better, but it was a really positive attitude from the boys with ten men, and we kept going until the 95th minute.”

One big issue to arise from the defeat is that Moors will be left shorthanded by Williams’ dismissal, ensuring the 26-year-old will be missing for the next few games, to add to the club’s lack of options in the backline.

To make matters worse, the club’s appeal to a National League commission to overturn the ban proved unsuccessful at the start of the week.

“Reiss [McNally] is having an operation, Nathan Cameron is back in training, so hopefully he’ll have a good week and get somewhere near [a return],” Yates added.

“Tyrone is Mr Cool, he’s so laidback and so in control of himself, but he took an elbow to the face and his reaction has cost us and him a four-game ban – it’s harsh but it’s a lesson he’s got to learn quickly.

“We wanted to keep our run going, but we want to go on another one now.

“We’ve got to take the adversity, take the defeat, and be better next time.”

Just one change was made to Yates’ side from the team that stunned Notts County, with James Ball taking the place of Cameron Archer in the starting XI.

After a confident start, Moors hit the front on away soil when Cranston found the net via the post from a well-worked free-kick routine. 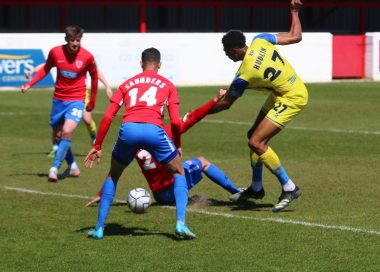 The visitors looked good value for their lead, but were stunned by an inspired Dagenham fightback that saw the lead change hands before the half was out.

Balanta’s cross into Saunders was pinpoint, and allowed the 22-year-old to net his first goal for the hosts by stealing in at the far post.

There was still time for Moors to go back in front before the break after a flurry of chances in quick succession, but it was a dubious handball by Storer – followed by Balanta’s successful spot kick – which instead tipped the balance in favour of the Daggers.

To add to Solihull’s woes, Robinson sunk home a third when nicking the ball into the net from Will Wright’s corner kick to leave the away side with a mountain to climb.

Moors were down but certainly not out and continued to pepper Elliot Justham’s goal, albeit to little avail, with Storer going close to amending for the second Dagenham goal with a strike that brushed the side netting.

A header from Williams came closer still and forced the home shot-stopper to claw the ball away from danger, but it was the defender’s reaction to an inadvertent elbow which made the biggest impact on affairs, resulting in his dismissal.

Rooney gave Yates and Co. a glimmer of hope with seconds remaining, but it was ultimately too little, too late.