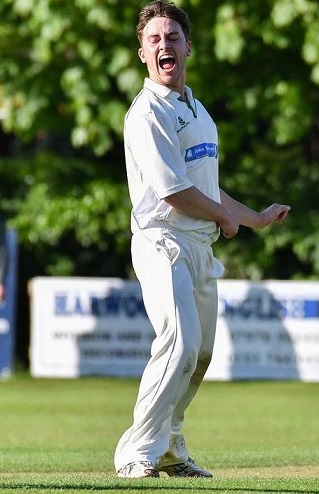 Adam Williams provided three wickets for his side, though K&D could not secure victory.

After an encouraging opening from K&D’s bowlers in limiting the Sandwell Park hosts to 168 runs, it took a stunning seven-wicket display from Shozair Ali (7-40) to condemn the visitors and leave Jack Grundy’s side with their third defeat this season.

Reflecting on the afternoon’s events, the Knowle & Dorridge skipper was of the belief that his side were one sizeable stand away from challenging for victory.

“We let ourselves down with the bat,” said Grundy.

“It was a slightly soft, new wicket and we were happy to bowl first and dismiss them for under 200.

“Adam [Williams] and Neil [Dexter] bowled really well together, and with some good fielding and James Middleton standing up to the stumps, we really dried the runs up well.

“Kabir [Ali] and Shozair got them to a competitive total, but we still really only needed one good partnership with the bat.

“Unfortunately, you do get days like that in cricket and the important thing now is how we bounce back next week.”

West Bromwich appeared to be in trouble at 82-5 until Kabir (40) and Shozair Ali (33) combined for 67 runs, pulling their side out of the mire somewhat despite their lowly final total.

With Williams (3-26) and Dexter (2-40) on form, the visitors were in fine spirits ahead of their reply, but quickly found life at the crease more difficult than expected as Shozair Ali ran riot (7-40).

Though Martin Donald (18) and Aristides Karvelas (23) plugged away, K&D were quickly seen off inside 34 overs.

Ahead of a difficult upcoming home fixture this Saturday, the Knowle & Dorridge captain added: “We have a keen rivalry with Barnt Green who are a good side, but we like to think we can challenge them.

“It always seems to be a close game, so it’s now a case of learning lessons and moving on.”