United and Knowle gear up for top-of-the-table clash 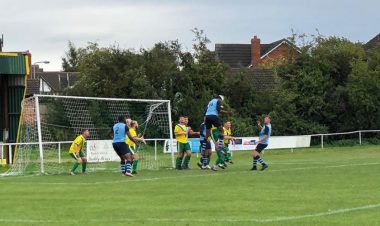 Two goals in four first-half minutes from Kyle Hudlin decided the contest, securing maximum points for the Young Lions for the fourth time this campaign.

Hudlin’s first on the half-hour mark followed excellent work from his teammates down the left flank, putting the ball on a plate for the striker to tap into an empty net.

And four minutes later he found his second, converting a cross from the right flank to leave the Swifts stunned.

Bolehall failed to muster much of a threat throughout the contest, rarely venturing into Solihull territory and only drawing two saves from United ‘keeper Tom Parsons between the sticks.

Standout performances from Cameron Ebbutt and Josh Parsons in midfield lit up an otherwise drab contest, with both sides cancelling each other out apart from the two clinical finishes from Hudlin.

The picture remained very much the same in the second half, despite Solihull increasing their number of efforts on target to 11 by the time the final-whistle blew.

A penalty for United in the 69th minute offered an opportunity for the visitors to bolster their advantage at Rene Road, though Hudlin was unable to wrap up his hat-trick and put his side out of sight after seeing his strike crash against the left-hand post.

Sam Manoochehri will seek improvements in the performance of his side going forward, but will undoubtedly be content with another three points that ensure Solihull continue the new campaign the way that they left the previous one – leading the table with 13 points after five games and with their unbeaten record still intact.

Second-placed Knowle have also impressed with three wins and two draws to date, sitting two points behind their local rivals after edging past Coton Green 2-1 last time out. 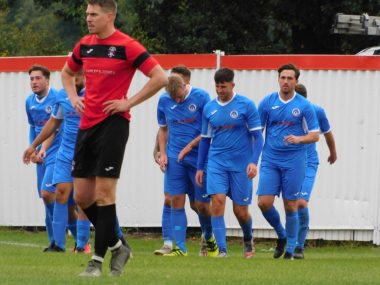 Knowle celebrate during their Coton Green victory. Picture: The Mowdog.

While the Robins have conceded double the amount of goals that United have shipped (8), the two sides have both been prolific going forward – Knowle’s tally of 16 just a single goal shy of the leader’s total – meaning a tantalising prospect should be in store at Hampton Road this weekend.

Solihull United are still on the lookout for sponsorship for this season, with any interested parties asked to get in touch with Tim Delaney at sufc.sec@gmail.com, or on 07827 963212.