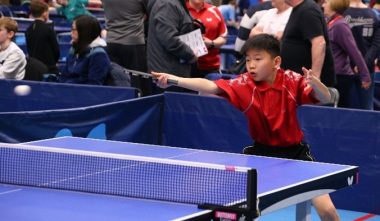 As a seeded player, Aarif received a bye into the quarter-finals where he beat Finlay Howes (Norfolk) 11-3, 11-4, 11-4 to reach the semi-finals.

Her victory against Sarri ensured her progress to the knockout stages as group runner-up before she then reached the quarter-finals with a 9-11, 13-11, 11-6, 11-7 success against Lyla Page (Essex).

Charlotte’s tournament came to an end at the last eight stage as she was beaten in straight sets (8-11, 4-11, 6-11) by Alyssa Nguyen (Devon) who was the number one seed and eventual runner-up whilst group opponent Catherine Lv won the event

He then secured a straight sets win over Harvey Gough (Worcestershire) in the first knockout round before succumbing to number 1 seed and eventual winner Jakub Piwowar (Devon) in the quarter-finals after losing 9-11, 9-11, 5-11.