SOLIHULL School played host to the 40th Auster-Robinson Family and Friends Cricket and Rounders Day as the annual jamboree returned following a forced break due to the Covid-19 pandemic.

This year’s event, which was first held in 1983, saw 80 family and friends descend upon the school with some travelling from as far as Spain and Oman to attend the day.

One of the team captain’s, Andrew Auster, was a pupil at the school along with his two brothers and former Solihull headmasters have previously played in the match. 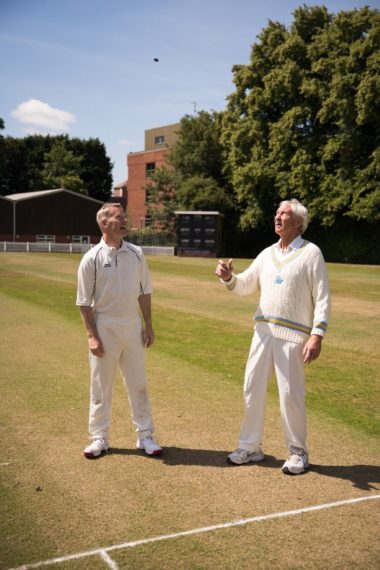 The coin toss ahead of the game.

The game has been staged in various locations over the years including at the Valley of Rocks in Devon, Gloucestershire, Shropshire, Lancashire, Hertfordshire and central London.

However, for the last 11 years, the match has been played at Solihull School with a special letter of congratulations from England cricket legend David Gower included in this year’s programme.

Sporting greats including Sir Geoffrey Boycott and the late Sir Alf Ramsey have previously sent good luck and congratulatory messages ahead of the match.

This year’s match saw the Roaring Forties XI take on Basil Forty’s XI with the former captained by Robin Thomas and the latter by A Auster.

The toss was won by The Roaring Forties XI who elected to bat first on a scorching day under a cloudless sky.

Openers Euan Thomas and Elliot Clark made a strong start as they put on 83 runs for the first wicket before the former was eventually bowled by veteran Andrew Wade.

Clark went on to score a majestic 75 which would win him the David Tankard for a fine batting effort whilst Wade scooped the John Tankard for bowling after taking 4-32. 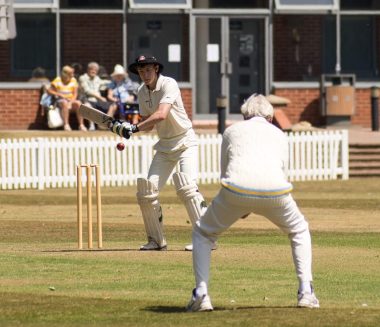 George Simons added 31 whilst Simon Auster hit 21 as the pair chipped in with crucial runs before Roaring Forties declared on 216-9 which forced Basil Forty to bat the final 20 minutes before tea.

And Roaring Forties struck before the break in play when Basil Forty’s opener Ian Fraser was trapped lbw having hit a four and a six in his fleeting innings.

Whilst lunch was a more energetic affair with eating, swimming and a game of rounders on the outfield, tea featured homemade cake and biscuits in the pavilion amongst a wealth of memorabilia.

This included a signed copy of the programme by former England captain Gower who wrote the words: “All the best with the latest in this long line of cricket and rounders days.”

When the action resumed, 14-year-old opener Ben Robinson played a patient innings against some quality bowling, defying his youthful age, to score a wonderful 72 before he fell to opposition captain R Thomas.

And James Widdop continued the momentum with eight fours and two huge sixes on his way to a half-century, ably supported by wily veteran Alan Robinson and James Vero.

This saw Basil Forty pass the 200-run mark, however, a late flurry of wickets set up a thrilling climax after a stumping off the consistent pace bowling of youngster Rupert Douglas.

Basil Forty’s captain A Auster scored a hugely popular seven runs before he was caught over the head of wicket-keeper Simon Auster fielding at first slip.

With just a single run between the scores, Basil Forty’s last batter, 12-year-old Phoebe Thomas, faced the final ball of the innings against the bowling of friend Joseph Lloyd.

A play and a miss handed the Roaring Forties victory by a single run after five and a half hours of action as senior players escaped to the pavilion for a well-earned beer to discuss the awards and presentation.

Tankards were handed out for the best batting, bowling and fielding displays whilst the Andrew Award is given for an outstanding contribution towards Family and Friends Cricket Day.

Brian’s Ashes are awarded for the best champagne moment and The Wendy Award is named in memory of Wendy Auster for her courage and friendship.

And the first recipient of Tom’s Cup was Ben Robinson, awarded by Helen Auster, for being nominated the Best Aspiring Young Cricketer of the day.

Cheers and tears ran freely as those in attendance remembered much loved, missed and absent family and friends with the game’s motto – Love and Live – repeated before promises were made to attend the 41st edition next year.