Solihull gaining momentum says McNally, after getting off the mark for Moors 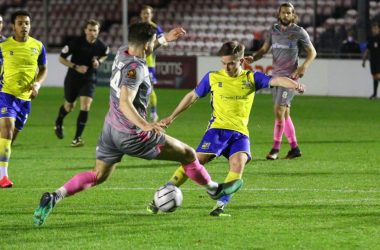 A FIRST goal for defender Reiss McNally further cemented the 20-year-old’s place in Solihull Moors’ first-team and helped guide Mark Yates’ side to a second successive victory in midweek.

Moors were comfortable 3-0 winners against Wealdstone on Tuesday night, with McNally’s goal joining Ryan Barnett’s 29th-minute opener and Joe Sbarra’s strike on the hour-mark to clinch it.

Having lost his first two fixtures on the road since returning to the Solihull hot-seat, Yates has found form at the SportNation.bet Stadium, seeing off Aldershot Town 1-0 last weekend despite the hosts ending the encounter with nine men.

For McNally, who netted his maiden goal for the club on his fifth successive start, victory against The Stones keeps Moors rolling on nicely – ahead of clashes against Barnet and Sutton United on Good Friday and Bank Holiday Monday respectively.

“I think it was similar to the last game, we battled throughout, did everything right and we started well – so I think it was well deserved,” said the defender – who has proved a revelation since returning from a loan move to Brackley Town.

“It’s always important getting the first goal, so you carry momentum throughout the game.

“They had a few spells, but we weathered the storm and scored some more.

“It’s been a tough few weeks with the losses, so the last game gave everyone a boost – we don’t want to keep losing all of the time and wanted to get back to winning ways – so we carried that on and it worked well again.

“I was getting a good run-up for all of the corners and set-pieces, so I thought I might be in with a chance.

“Jordan [Cranston] whipped in a great ball, I managed to get some contact on it so I’m happy to get my first goal, hopefully the first of many.

“As a defender we’re not going to be scoring the goals most of the time, so what we want are the clean sheets, me and Tyrone [Williams] have been working well to get those.

“Every game that comes up, we want to get a clean sheet and a win. We’ve got some good rhythm going into those [the Easter fixtures].”

Both James Ball and Mitch Hancox were missing in midweek, owing to their dismissals against Aldershot three days prior, meaning Sbarra and Cranston were afforded starting berths.

A first sighter from Sbarra set the tone for a confident opening from the home side, who also went close through Adam Rooney’s speculative drive.

Solihull had Ryan Boot to thank for turning Dennon Lewis’ goal-bound effort around the post, as Wealdstone began to demonstrate an attacking threat of their own.

Fortunately for Yates and Co, it was advantage Moors just before the break when Shrewsbury Town loanee Barnett took advantage of Stones ‘keeper Harry Isted’s venture out of goal to direct the ball into an empty net.

With a priceless lead at the break, Solihull sought to extend their advantage, doing so when McNally crashed a header home in the 47th minute.

And with Wealdstone floundering, the hosts added a third when Sbarra rippled the roof of the net in spectacular fashion after being teed up by Cameron Archer.