Shan: Intent was lacking at times - The Solihull Observer

Shan: Intent was lacking at times 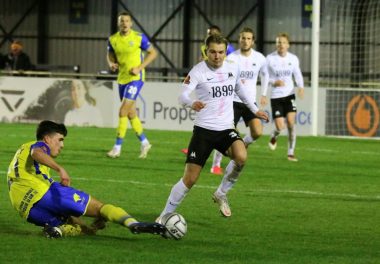 A BETTER attacking mindset has been demanded by Solihull Moors boss Jimmy Shan in the wake of Tuesday night’s 2-1 National League defeat to leaders Torquay United.

The Gulls showed exactly why they have been the pace-setters throughout the campaign by taking the chances afforded to them to see off Moors.

Asa Hall’s 18th-minute penalty opened the scoring for the visitors at the SportNation.bet Stadium – the first time Solihull had returned to their home turf for eight games – before Billy Waters doubled Torquay’s lead just after the hour mark.

Alex Gudger reduced the deficit in the ninth minute of stoppage time, four minutes after visiting shot-stopper Shaun MacDonald saw red, but the hosts did not have enough in the tank to dramatically restore parity.

Shan admitted his side needed to be more persistent in both their chance creation and in remaining upbeat when efforts did not hit the back of the net and said: “It’s something the group have to be better at.

“In the first 15 minutes [of the second half] we had some really good opportunities without really posing a threat on their goal.

“They’re on the back foot and against the ropes and we’ve got to keep peppering them. We started to get frustrated, but if you keep putting the ball in with quality then the chances are that we’re going to fashion an opening.

“If you concede two goals in any game, it’s going to be a difficult task to get back into it and try and win.

“Some of our decision-making against pressure at times was poor.

“Forget the added time and throwing the kitchen sink [at the end], we had 45 minutes to do it.”

Returning to action three days after a goalless away draw with strugglers Weymouth, Solihull made two changes, bringing in Joe Sbarra for Kyle Hudlin and Alex Gudger for Tyrone Williams – the latter missing out on the starting line-up for the first time this season due to injury.

Adam Rooney sent the hosts’ opening effort inches past the post after good link-up play between Callum Maycock and Sbarra – a promising sign of intent that was quickly extinguished by the awarding of a penalty to the visitors after a handball by Kyle Howkins.

Hall made no mistake with his spot kick to the dismay of Shan and Co, although that did not dishearten Sbarra from trying his luck with a strike that beat the goalkeeper but just evaded the post. 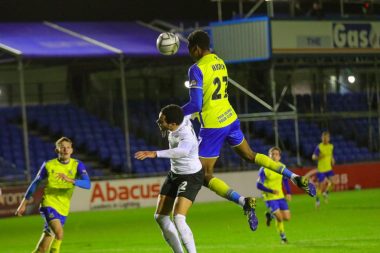 A lack of decisiveness from both sides led to a more subdued game, until Maycock threatened to haul Moors level before the break only to directing Stephen Gleeson’s shot narrowly off target.

Shan opted for more presence in Solihull’s forward line after the interval, bringing Hudlin on in place of Gleeson, something which encouraged plenty of wing play in the hope of supplying the hosts’ towering striker.

With the hosts building more of a foothold in the encounter, Torquay struck a hammer-blow when Connor Lemonheigh-Evans set free Waters to tuck the ball into the far corner.

It was not until the introduction of Ben Usher-Shipway that Moors regained some momentum, picking out Hudlin with a sumptuous ball that was nodded wide of the mark.

Sbarra was next to go close, stinging the gloves of MacDonald, but again to no avail.

Substitute Justin Donawa struck the woodwork with a clever touch goalwards – a moment which appeared to suddenly spark the game back into life – with Torquay’s custodian dismissed shortly afterwards for bringing down Hudlin.

Then, late in stoppage time, Gudger touched the ball home to give Solihull the slightest glimmer of hope for the seconds that remained but Torquay’s victory was confirmed soon after play had restarted.

Fifteenth-placed Moors will dust themselves down and aim to bounce back at the first opportunity on Saturday, when they head to Boreham Wood in eighth to take on Luke Garrard’s men.