Shan impressed with new-boy Cameron's impact, as Hudlin wins it at the death 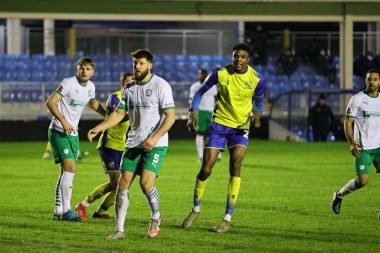 LAST-GASP hero Kyle Hudlin was hailed by manager Jimmy Shan after producing the goods once again to give Solihull Moors a dramatic late victory over Chesterfield on Tuesday night.

The towering striker nestled the ball in the back of the net with a 93rd-minute header to complete a 2-1 victory against the Spireites – who held the upper hand going into the clash after a 1-0 victory at the Technique Stadium in the reverse fixture – pushing Moors into tenth place and the top half of the table.

After a run of inconsistent form heading into the New Year, something affected by an equally erratic playing schedule, it was vital for Solihull to turn a corner and begin their ascent back up the National League, Hudlin securing a clean sweep of the points after Joe Sbarra’s equaliser wiped out Tom Denton’s first-half opener.

And there was enough to suggest that the Moors will continue to rise higher with a number of games in hand on the sides that sit above them, Shan left with a good impression of his troops from the midweek performance. 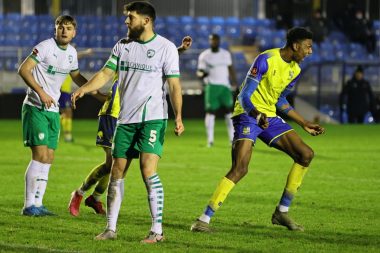 Kyle Hudlin’s fourth goal of the season was enough to down the Spireites. Pictures: James Holyoak.

“The way that we approached the game, I think we were the only team trying to play the right way and play good football,” said the 42-year-old.

“After Saturday, we knew their approach was to hit [Tom] Denton with a diagonal ball at every opportunity, he causes problems and is a big threat.

“I thought for large parts of the first half we dealt with that quite well. We played some outstanding football.

“I’m delighted with our execution of the game plan, but also the way in which we like to play.”

“We had some really good momentum and spells on the ball – it’s probably some of the best passages of play that we’ve put together for a long time.

“It was an outstanding delivery from Jamie [Ward] and I’m delighted for the big man yet again, another goal and one that you expect from someone at six-foot, nine.” 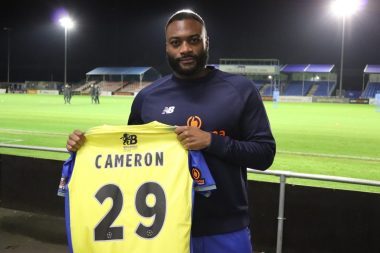 There was double delight on the night after the club swooped to secure the services of Wigan Athletic defender Nathan Cameron on a short-term deal, and after going straight into Shan’s backline, the 29-year-old gave an immediate positive impression.

“I thought he was outstanding and gave us that level of maturity, his first contacts were very good and he’s very clean on the ball,” added the Moors manager.

“He’s fitted into the team seamlessly and accepted the ball against pressure, and is happy to give the ball to others when he needs to.”

The Moors new boy was just one of six changes in all to Saturday’s team, teammates Daren Carter, Cameron Coxe, Justin Donawa, captain Kyle Storer and Hudlin joining him from the get-go.

After some close shaves with the visitors’ goal, Hudlin and Coxe registering notable efforts, it was Chesterfield who dealt the breakthrough blow when Denton was gifted enough space to head home from a 34th-minute corner.

Trailing at the break, Moors look fully intent on clawing the game back at the nearest opportunity, almost doing so when Donawa narrowly cleared the bar with a half-volley. 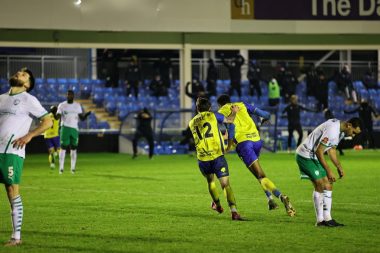 Number 12 Cameron Coxe was the first to celebrate with his teammate. Pictures: James Holyoak.

The result looked set to stand despite late efforts for both sides, including a questionable goal from Storer that was ruled out for a foul, though it was Moors who won the day when Hudlin finished off a counter-attacking move in the dying embers.

In the aftermath of Moors’ late show, Shan is firmly eyeing an improvement in league standing.

“We’ve not shied away from the fact that we know where we are, we’ve got some key players missing, and those unavailable would probably get into any team in this league,” he continued.

“Obviously it’s going to be a loss when those players aren’t available, so we have to fight and give others an opportunity – those presented with it have to step up to the plate and I think they did that tonight.

“It was important to pick up the three points to make sure we stay in and around the pack with games in hand, and to build some belief in the changing room again after a poor defeat to them on Saturday.”

With positive COVID-19 cases in Dagenham & Redbridge’s squad ruling out Saturday’s home meeting, Moors are next in action away to league leaders Torquay United on Tuesday night.