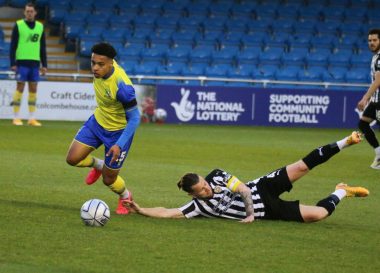 DEFENDER Jordan Piggott says a change of approach was ultimately what helped Solihull Moors complete a 2-1 win over Notts County on Tuesday night and continue the Mark Yates revolution.

Moors secured the famous win thanks to their second-half endeavours, James Ball cancelling out Jimmy Knowles’ 11th-minute opener with 25 minutes to play, before Kyle Hudlin netted a 79th-minute winner.

For Piggott, who replaced the injured Reiss McNally in the heart of the hosts’ backline, the reaction from his teammates to a below-par opening half was a highly-encouraging one.

“We didn’t start the best and we know that, it’s always disappointing to go a goal down but the reaction from the lads was brilliant – so it was a well-deserved three points I’d say,” said the 22-year-old.

“They’re a big side and a tough one, we knew what they were going to bring.

“We had to be at our best – first half we weren’t – but second half we knew we were going to turn it around.

“It’s a poor goal [for the away side] from our point of view, they didn’t have much apart from that, but it’s still a great reaction from us.

“The game plan in the second half was just to get in their faces, play with high pressure and let them cause mistakes.

“After the first goal goes in, momentum goes in our favour.

“I thought I coped well coming back into the team, it’s not always easy after a long time out on the bench, but I’ve got to always make sure I’m ready to come into the team.” 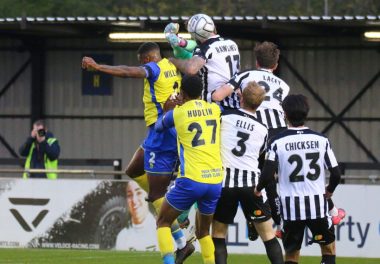 Cheltenham Town loanee Alex Addai was drafted straight into the hosts’ starting XI, replacing Jamie Ward as one of two Moors changes alongside the injured McNally.

When Magpies forward Kyle Wootton cracked an early shot goalwards to test the concentration levels of goalkeeper Ryan Boot, it was an early indication of what was to come from the visitors at the SportNation.bet Stadium.

With the next meaningful attack, Knowles connected with a far-post delivery from Lewis Knight to sweep the ball into the far of the net and send County in front.

It meant Solihull had lost sight of their run of three successive clean sheets that they had started the evening with, but showed little sign of disheartenment when stepping up their efforts down the other end of the pitch.

Jordan Cranston was one of the men to threaten, launching a free-kick over the bar from 25 yards, before fizzing a cross-shot wide of both the Notts County goal and the late arrival of Hudlin inside the penalty area.

Dion Kelly-Evans reminded the hosts of the threat posed by the Magpies and almost doubled the advantage, but for a misplaced header that missed the target – proving the last real action of the first half.

Wootton would have had another goal in the opening minutes of the restart, had it not been for the acrobatics of Boot to claw the strike away, before saving from the County forward once more from the resulting corner.

Magpies custodian Sam Slocombe was equally active, making an astonishing save to nudge Hudlin’s spectacular 25-yard drive onto the woodwork and away. 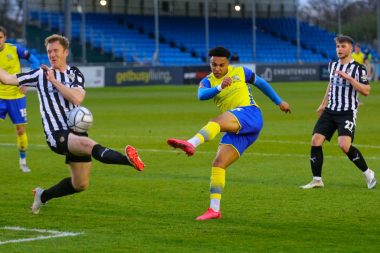 Then, buoyed by the near miss, Solihull drew level.

Ball’s arrival as a substitute was seemingly the tonic that Moors needed, as the midfielder touched home Hudlin’s lay-off.

Not content with taking just a point, the hosts continued driving forward and were ultimately rewarded when Hudlin instinctively flicked an audacious back-heel into the net from inside the penalty area.

County had no response, their final opportunity being blazed over by substitute Ruben Rodrigues, to secure Moors a first-ever win against their opponents.