Sarri indebted to Ward after Blues arrival - The Solihull Observer 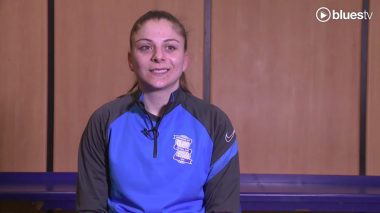 GREEK international Veatriki Sarri admits that she is out to prove her worth to Birmingham City Women manager Carla Ward following her recent arrival.

The 23-year-old, who has spent the past three years with Championship club Sheffield United, arrived prior to last weekend’s postponed Super League clash with Tottenham Hotspur – a result of a lack of playing numbers in the Blues camp.

Now reunited with her former boss, the forward pointed to Ward as a key figure in her transfer to the SportNation.bet Stadium.

“Obviously I worked with Carla before at Sheffield United, and I’m so grateful that she and the club have given me this opportunity,” said Sarri.

“I’m extremely grateful and I hope to repay that trust.

“I’ve admired her as a person and also as a manager, she creates such an environment where she gets the best out of everybody and that’s what she’s done here.”

An experienced international with 12 first-team appearances for her country to date since her debut in 2015, Sarri signs an 18-month deal with Blues, one which she aims to take full advantage of once her feet are under the table.

“I think that now I’m in this kind of set-up and environment, with such good players and staff, I think that this will be instrumental and that I’ll hopefully be able to improve even more – I have everything here to push on,” she added.

“I think there’s more to come from this squad. Nine points is a very good achievement, but there’s loads more to come and I hope to be a part of this success.”