BIRMINGHAM and Solihull RFC have confirmed the appointment of James Panter as the club’s new Head Coach.

Panter was chosen as the preferred candidate following a rigorous recruitment process and replaces Clive Chapman in the Portway hotseat after the former coach retired at the end of last season. 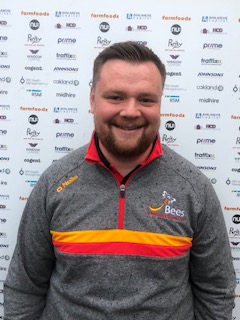 And Panter has big shoes to fill after Chapman guided the club to a league and cup and double last term.

Panter has spent the past couple of seasons as backs and defence coach at Edwardians and has previously been Head Coach at Birmingham Civil Service who he led to two promotions and a North Midlands Vase title.

Head of Senior Rugby, Lou Lupoli said: “We are absolutely delighted that James is joining us. He is a coach whose rugby philosophy and ambition is completely aligned with the club’s.

“We welcome him to the Bees Family! Wishing the team a successful season in the new Counties 3 Midlands West South.”

And Panter has recruited Tom Fleming to support him as forwards coach who spent the majority of his playing career at Solihull-based Camp Hill and held a coaching role at Midlands 1 side Stratford-upon-Avon.

Fleming said: “I thought that I would be giving it all up but when James contacted me and asked the question, the pull of coming to the club with Bees’ history was too strong to ignore.

“Having seen some of the games from last season, I am really excited about being involved with this group of young players.”

Lupoli added: “The experience that Tom brings will be invaluable and, together with James, I think we have the perfect blend of coaches to develop our squad.”