Pride was on the line after the break, says Shan in aftermath of Stockport thrashing - The Solihull Observer

Pride was on the line after the break, says Shan in aftermath of Stockport thrashing 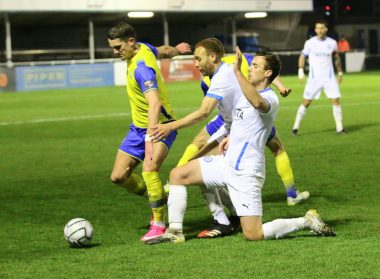 MANAGER Jimmy Shan says it was a matter of playing for pride for ten-man Solihull Moors in the second half of their Stockport County drubbing – after going down 5-0 on Tuesday night.

Moors stretched their dismal winless run to six games, making it just one win in their previous ten National League outings, form that was always at threat of worsening after Tyrone Williams’ red card with the scores level after 17 minutes.

The full-back’s foul was immediately punished by a John Rooney penalty – who ended the night with a brace – adding to goals from Harry Cardwell, Tom Walker and Jack Stretton as Stockport ran amok at the SportNation.bet Stadium.

It was a night of contrasting fortunes for the two sides that reflects fairly on the current league standings, with Simon Rusk’s County flying high in fourth and Moors floundering in 17th place – albeit just six points away from the play-offs with a game in hand on seventh-placed Eastleigh.

While Solihull will attempt to pick themselves up in Saturday’s trip to FC Halifax Town, it is clear that the wounds from their mid-week mauling will need to be cleaned urgently, with Shan alarmed by the manner in which his side found themselves 4-0 down after 28 minutes played. 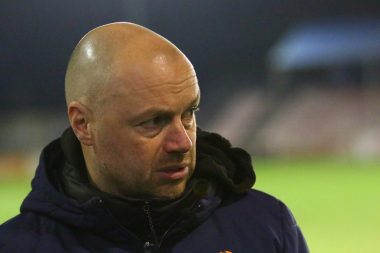 “It’s disappointing obviously, and somewhat embarrassing for a ten-minute spell,” he said, in reference to Stockport’s four-goal salvo in the immediate aftermath of Williams’ dismissal.

“We concede a penalty – whether it’s a foul or a sending off or not – and then we have probably the maddest ten-minute spell that I’ve ever been involved in in a football game.

“The players at half-time understood that we needed to be better in that period.

“I think he’s [Cardwell] gone down before he’s anywhere near Tyrone. It looked like he was on his way down before they’ve even come together, so on first take I’d lean towards it not being a penalty.

“It’s difficult to swallow because you’ve got to try and find a way to stay in it.

“My thought was who do we put on and how do we tighten up at the back but also enable ourselves to have enough players on the pitch to offer that punch.

“If you sit and defend, the inevitable will happen and they’ll keep knocking on the door until it caves in.”

The hosts went into the match with Cameron Coxe, Kyle Hudlin and Jamie Ward – a late goalscorer in Saturday’s 1-1 draw with Maidenhead United – all brought into the starting XI, one which was hastily rearranged approaching the midway point of the half after Williams’ instant red. 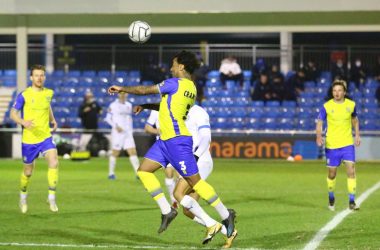 A trip on Cardwell by the 26-year-old had grave implications, with the subsequent penalty struck home with ease by Rooney beginning an instantaneous Moors downfall.

Two minutes later, Rooney had a second when slotting into the bottom corner from the edge of Solihull’s penalty area.

And despite Shan’s efforts to shore up the defence by bringing on Callum Maycock and Darren Carter for Hudlin and Ward, a third goal from Stockport’s Cardwell immediately signalled to a long night ahead.

A fourth goal followed just four minutes later, bringing into question just how big Solihull’s humbling was going to be, Walker this time the scorer after bundling home Sam Minihan’s delivery to the back stick.

There was little surprise that Stockport maintained their stranglehold on proceedings after the break, though Moors to their credit did manage to limit the visitors impacting the scoreline further for the majority of the second half.

It was late in the day when Stretton wrapped up victory for the Hatters with ten minutes remaining, landing one final blow before the full-time whistle sounded.

“With the timings of the goals, it was just a case of damage limitation and trying to shut up shop and weathering as much momentum as we could,” Shan summarised.

“Thoughts very swiftly run to thinking that it could be five, six, seven, eight or nine – there’s obviously a lot of pride to play for in that second half in terms of making sure that we were as organised and resolute as we possibly could.

“But it’s almost impossible with the scoreline as it is to try and give a punch back and get them on the back foot.”