"Moors would have been clear winners, if not for slow start" - Barnett - The Solihull Observer

"Moors would have been clear winners, if not for slow start" - Barnett 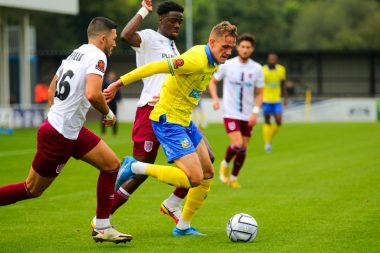 AN UNCHARACTERISTIC slow start by Solihull Moors was the factor that proved most costly in last weekend’s 4-3 defeat to Weymouth, argued midfielder Ryan Barnett.

The SportNation.bet Stadium hosts found themselves 3-1 down at the break after Bradley Ash’s double added to Josh Leslie-Smith’s eighth-minute opener and restored the Terras’ two-goal advantage following a Joe Sbarra goal.

It means Moors remain winless after three games of the new National League season on two points, with Barnett intent on securing a first victory at Aldershot Town on Saturday.

“To give away sloppy goals like that, it’s just not how we’re set up to defend,” said the 21-year-old.

“But the way we came back is something that can be taken as a positive.

“The timing of the fourth goal wasn’t great, it gave us a mountain to climb.

“But credit to Joe [Sbarra], he took his two goals well and [Andrew] Dallas follows up well on the rebound from the penalty – now we go onto the next game.

“We can’t dwell on it, the performances have been there so it’s just about the results now.”

Solihull were left shell-shocked by the visitors’ early goal which came with Weymouth’s first attack – a sensational strike from Leslie-Smith that picked out the far corner of Marcus Dewhurst’s net.

On 21 minutes, it was two when a defensive mishap allowed Ash to fire home, a goal which forced Moors to go soul-searching.

Neal Ardley’s men did find a response through Sbarra’s stabbed finish seven minutes before the break, only for Weymouth to net in first-half stoppage time – again through Ash.

It would have been reasonable to believe Moors were dead and buried after McQuiod added goal number four with an instinctive finish, though the response of the hosts suggested otherwise.

Sbarra blasted home Justin Donawa’s centre with 20 minutes to go, before seeing a hat-trick clinching penalty saved that was eventually turned home by Dallas, in a finale that failed to result in a levelling goal.

“I think if you look at the first half-hour and the way we started, I don’t think that’s the kind of standard that we’ve set ourselves in the early part of the season,” Barnett continued.

“But if you look at the way that we come back into the game, we created so many chances in the second half and put them under pressure – they didn’t really have a sniff until after the break for their fourth goal.

“It’s four mistakes which have cost us today – you can’t concede four and expect to win.

“It’s a credit to everyone [that we kept going], I think if we just started the game in the way that we finished it, we would have been clear winners.”