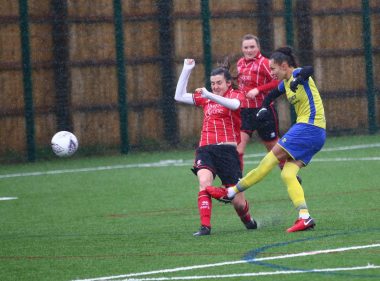 PROGRESSION in this year’s Vitality Women’s FA Cup has been cut short for this season after Solihull Moors crashed out at the first-round stage in a 3-1 defeat to Lincoln City on Sunday.

Moors. of the FA National League Division One Midlands, gave a good account of themselves against league rivals Lincoln, but ultimately came up short at Yarborough Leisure Centre – missing out on a meeting with West Bromwich Albion in the second round in the process. 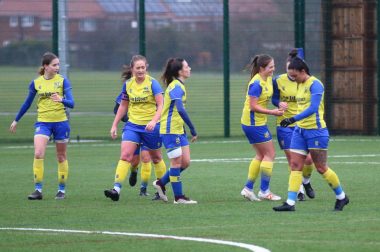 The visitors Solihull did well to withstand the barage of Imps attacks that they were faced with and eventually found their feet, levelling when Lois Jefferies received possession from Leah Seivwright before dinking the ball over the helpless Amy Halloran on 25 minutes.

But while David Healey’s side continued to have an increasing say on affairs, they fell behind at a crucial time just eight minutes before the break – Amy Blinkhorn firing home after a rebound fell her way.

Seivwright felt aggrieved when her shouts for a spot kick were waved away by the referee, a free kick instead rewarded which was blasted into the City wall by Jefferies, proving the final chance of the half.

Lincoln used their second go-ahead goal to their advantage and strengthened their cause when being awarded a penalty on 56 minutes – the result of a foul by Ellie Bruton.

McHamilton made no mistake from 12 yards, crashing the ball home with confidence after sending Vitale the wrong way. 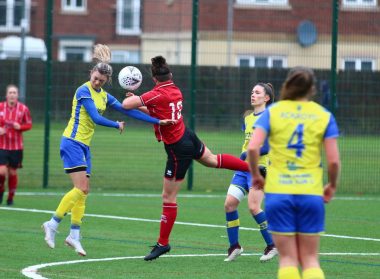 Mollie Richardson, left, is engaged in battle for the ball. Pictures: Richard King.

Moors at this point were living dangerously and were fortunate to not fall further behind when their woodwork was rattled.

It took a number of changes by Healey to freshen Moors’ attacking outlook, something which almost paid dividends as Jefferies met Seivwright’s delivery to the far post – the forward unable to provide the finish on 75 minutes.

Then, three minutes later, another golden chance arose for Kathryn Pagan following Zoe Creaney’s incisive through ball, this time the former failed to find the target as Moors’ hopes began to dwindle.

A lengthy stoppage followed in the final ten minutes after Seivwright landed heavily on her ankle, resulting in her absence for the remainder of the game and effectively ending Solihull’s slim chances of salvation.

Lincoln twice had the ball in the net in the dying embers, both being ruled out for offside, as the visitors’ blushes were somewhat spared.

Moors, who sit fourth in Division One Midlands, turn their attentions back to league duties on Sunday when visiting Long Eaton United (sixth) in the final fixture of the year.