Moors up and running as Brakes stall - The Solihull Observer

Moors up and running as Brakes stall

GOALS from Jamey Osborne, Joe Sbarra and Jake Beesley sent Solihull Moors on their way to a first victory of pre-season at Leamington’s Phillips 66 Community Stadium. 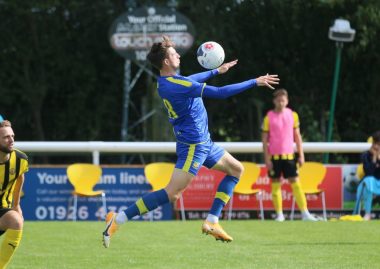 Jake Beesley chests the ball down. Picture by Richard King.

Saturday’s 3-1 win gave another indication of the upwards momentum Jimmy Shan’s men are generating during their warm-up fixtures – having held Championship side Coventry City to a commendable 2-2 draw just days earlier.

With the same side that appeared in midweek stepping out to meet their National League North opposition, it was in fact the hosts who had the first sighter of goal, namely Dan Waldron’s effort from range that glided past Ryan Boot’s post.

Former Cardiff City man Cameron Coxe was involved in the build-up to the opening goal on 12 minutes, after heading Adam Rooney’s pass into the path of Sbarra – who unselfishly directed the ball to Osborne to apply the finish.

Sbarra nearly had the goal his early play had merited shortly after, meeting Coxe’s cut back but only sending the ball into the gloves of Jake Weaver. 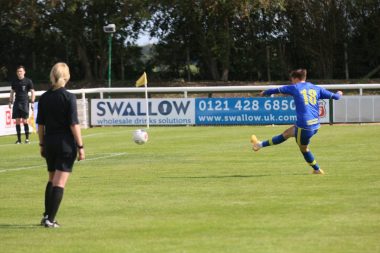 Moors’ third and final goal is lashed home from the spot by Jake Beesley. Picture by Richard King.

One of the more pleasing aspects was the willingness of Moors to get the ball down and play, a style that Shan’s men looked comfortable with during an opening dominated by the visitors.

Solihull’s hard work up until that stage was nearly undone when Simeon Maye rattled the crossbar with a header from a Leamington corner, while Waldron went closer still with a strike that found the back of the net – only to be denied by the referee spotting a foul in the build-up.

A cushion was provided by Sbarra’s deserved goal just before the break, when his clever lob over Weaver found the far corner after being picked out by Mitch Hancox.

Moors were unable to maintain their intensity as the game got back underway, with a lacklustre opening leading Shan to ring the chances with half-an-hour remaining – a decision which afforded Jordan Cranston his debut in blue and yellow.

Beesley was another man that entered into the fray, and he almost made sure of the victory with a header that glimpsed past the near post.

It was game on again when a Leamington trialist rolled the ball through to Kaiman Anderson to reduce the arrears following a defensive mix-up, though Beesley had other ideas by winning and then converting a penalty moments later – his third goal in two games.

Moors and the Brakes will do battle again in the final pre-season friendly at the SportNation.bet Stadium on Saturday, September 26 – but not before a double header against another Step Two opponent in Hereford.

The first of those two games, a home clash on Saturday, September 19, is followed by the away game at Edgar Street on Tuesday, September 22.