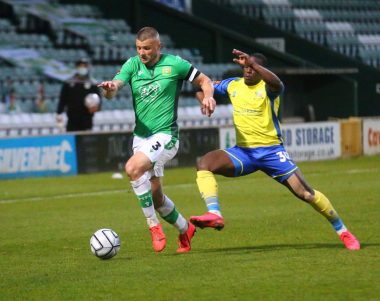 CONTRASTING fortunes were in store for Solihull Moors in midweek, as the highs of last weekend’s thumping 5-1 victory over Yeovil Town were subdued by the lows of a 3-0 reverse at Huish Park on Tuesday night.

Moors were taught a lesson on the road after Joe Quigley’s hat-trick erased memories of their straightforward success just three days earlier, demonstrating just how quickly fortunes can change in football.

With just eight fixtures remaining, the defeat means Solihull’s faint hopes of making the National League play-offs have gone up in flames – but for another resurgence in the form of an unbeaten run.

For manager Mark Yates, who has overseen a real uplift in atmosphere around the SportNation.bet Stadium since his return, there was a contrast in approach which he always saw coming from the Glovers.

“The disappointing thing for me is that in the second half particularly, they did to us what we did to them all game on Saturday,” said the 51-year-old.

“I knew it was going to be a really tough game on the back of that, they’re two evenly-matched teams and they were always going to react.

“Then it’s about us dealing with that, I felt we lost every header, too many individual battles and ultimately that’s cost us the game.

“I thought the penalty [to Yeovil] was a disgusting decision – that’s put us on the back foot.

“We’ve hit the post through Kyle Hudlin, Joe [Sbarra] had a couple of efforts that we’re hoping go in. We just showed a bit of a soft underbelly which I don’t like.

“There were chances that we’ve got to be putting away, we had three or four really good efforts.” 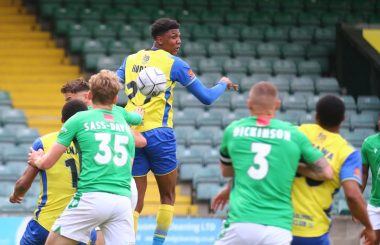 With a trip to the Racecourse Ground on Saturday against a Wrexham side chasing the play-off places to come, the Solihull boss is keen to instigate an immediate response to their midweek downfall.

“Our away form hasn’t been great, so we’re going to have to look at that on Saturday,” Yates continued.

“We need to get a positive result and put some pride back in the shirt, and I know that the lads have got that in them.

“We’ll pick a team that goes down there and puts in a good shift.”

Given the manner in which Moors tore apart Yeovil in the previous outing, an unchanged line-up should have come as no surprise, with hat-trick hero Justin Donawa and fellow goalscorers Kyle Hudlin and James Ball all starring.

The midfielder then zipped a shot wide following a corner kick, while Donawa was unable to direct a stab at goal underneath the Yeovil crossbar.

Then, the hosts hit the front, capitalising on a questionable penalty conceded by Callum Maycock.

Quigley was denied by the feet of Ryan Boot intiially, but with the ball falling back into his path via the crossbar, the forward converted with an expert diving header on 27 minutes.

Ben Usher-Shipway denied Town’s scorer from netting a second shortly after, clearing another headed attempt off the goal-line to save the visitors.

Moors were desperate to bring themselves back into contention before the break, and could come no closer than Hudlin’s fizzing free-kick which cracked the frame of goal.

An instinctive interception by Smith proved crucial to beat Ball to a Hudlin flick on shortly after the restart, as Quigley gave another demonstration of his attacking prowess when doubling the lead on 54 minutes.

The 24-year-old thumped a near-post shot into the net after a neat one-two with Carl Dickinson, giving Moors a mountain to climb.

A third for Yeovil and Quigley summed up proceedings on a frustrating night for the away side in Somerset, the striker nestling the ball into the roof of the net to leave Boot with no chance and Solihull with nothing to show for their 310-mile round trip.