Moors shot down in Trophy by late goal, but Shan is remaining upbeat 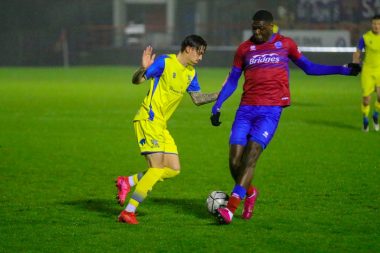 Cameron Coxe cuts the ball inside past his marker. Pictures: Tom King.

Eventually losing 3-2 at the EBB Stadium, Moors looked down and out after Mohamed Bettamer’s penalty and a Toby Edser strike before half-time gave the Shots a priceless lead at the interval.

And while Solihull were undeterred, fighting back through Kyle Hudlin and James Ball during a ten-minute double salvo, it was another effort from Bettamer that settled it with 16 minutes to play.

After crashing out at the fourth-round stage, Shan was quick to address the magnitude of the task at hand for Moors in Hampshire – when considering the Solihull players and staff were forced to self-isolate for ten days prior to the Trophy meeting.

“I thought it was always going to be difficult, having that delay [following Solihull’s self-isolation period] and then coming back in,” said the Moors boss.

“I have to say I was proud of the team’s performance. We seem to be back on track into playing the way that we want to play.

“The nice thing is that we created a lot of opportunities, we had four or five really good chances from wide areas in the first half and then again in the second half – we needed to be more clinical in and around the final third.

“It’s disappointing because we wanted some longevity to try and stay in the Trophy, with the end prize and goal being a trip to Wembley.

“But we have to park that and our emotions a little bit and evaluate the performance, which I was really pleased with.

“There were a few that had fatigued and with 25 minutes to go looked like they were running in treacle – but that’s the product of having ten days off, being stuck in the house and not being able to train.” 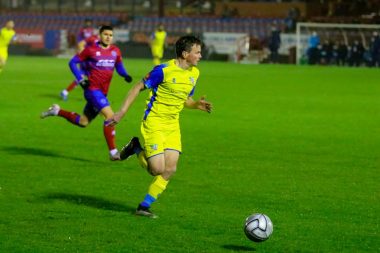 With Alex Gudger, Stephen Gleeson and James Ball back in the starting line-up – the latter making a first appearance since before Christmas – Moors looked intent on hitting the ground running from the very start.

And they could not have come much closer than Jordan Cranston’s whipped free-kick that cracked the frame of goal and ricocheted away with seconds of the game elapsed.

While the visitors created some good passages of play and crafted numerous half-chances, a foul by Gudger on Joel Nouble gifted Aldershot forward Bettamer the chance to crash home from 12 yards on the half-hour mark.

Then, seven minutes later, Edser found the composure to tuck the ball out of Boot’s reach and double Town’s advantage.

It was the turn of towering forward Hudlin to bring Moors back to life, nodding in a Cameron Coxe delivery from the right flank eight minutes into the second half.

With momentum building, a piercing run through the home defence by Joe Sbarra then allowed the playmaker to tee up Ball for a tap in.

Moors looked capable of winning the tie after restoring parity, but there was simply no reply after Bettamer’s free-kick deceived Boot and creeped into the net – despite Mitch Hancox’s drive that threatened to take the game the distance after clattering the crossbar.

Attentions turn back to National League duties on Saturday with a trip to Dover Athletic – replacing the postponed game at Yeovil Town after the hosts’ COVID-19 struggles – followed by a home encounter with Notts County on Tuesday night.