Moors on the comeback trail to sink Weymouth 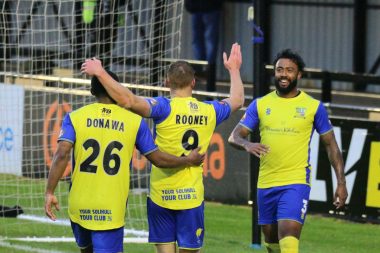 TUESDAY night’s 2-1 comeback win over Weymouth continued Mark Yates’ unbeaten home record, after goals either side of the break from Kyle Hudlin and substitute Adam Rooney pushed Solihull Moors up to 14th in the National League.

A ninth-minute Josh McQuoid opener threatened to tarnish Yates’ streak at the SportNation.bet Stadium, but the gritty response which preceded the equalising goal on the half-hour mark, and then the crucial breakthrough on 63 minutes, ensured that Moors have now gone seven games without defeat on home soil.

The result gave Solihull some cheer after last weekend’s trip to King’s Lynn Town was rained off, there still remains an outside chance that the Moors could sneak into the play-off places – providing the club’s two games in hand result in victories – ahead of two further home fixtures against Woking and Barnet on Saturday and next Tuesday respectively.

For Yates, who was given encouragement by his side’s ability to bounce back, the latest midweek bout came as a good character assessment of his troops.

“I thought we were well worth it after a first slow 20 minutes, in which we gifted them a goal and some other chances,” said the 51-year-old.

“Then they did what we asked of them in the lead-up to the game.

“We showed a bit of character at 1-0 down, we chased everything and the [equalising] goal came from that – once we scored we were the better team.

“We pretty much dominated then, we didn’t let them play, they played in areas where we were happy to keep them, and I thought it was a really polished performance for the final 60 minutes of the game.

“Credit to the players, even though things weren’t brilliant [at the start], they’ve dug in.” 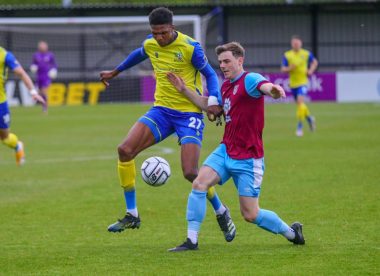 Kyle Hudlin demonstrates a show of strength to shield the ball. Picture by Tom King.

Weymouth’s lengthy journey to the West Midlands appeared to have been worthwhile when the Terras hit the front early on, a result of Sean Shields’ cross-shot into the path of McQuoid who nudged the ball home.

While Moors were below their best, a leveller on 31 minutes came as a huge sigh of relief, and instigated what was ultimately a complete revival for the hosts in both the playing stakes and the scoreline.

Hudlin was the man to claim the timely goal before the break, charging down a clearance by visiting ‘keeper Ethan Ross to touch the ball into an empty net and get Solihull back on track.

From there, the home side looked likely to snatch another before the half-time whistle, albeit for Alex Addai to clear the crossbar from Callum Maycock’s incisive through ball.

With Solihull in the ascendancy, Hudlin almost had a second goal for his troubles after the interval but for the well-placed legs of Ross to keep the ball out.

And though a James Ball penalty appeal was waved away, a moment of magic from the hosts decided the encounter.

Whipping in a sumptuous cross, Jordan Cranston picked out the head of Rooney to glance the ball past Ross and win the day.

Proving one of the final highlights of the evening, Moors saw out proceedings with relative ease to claim their 15th win this term.