Moors need to be cut-throat to progress, says Shan - The Solihull Observer

Moors need to be cut-throat to progress, says Shan 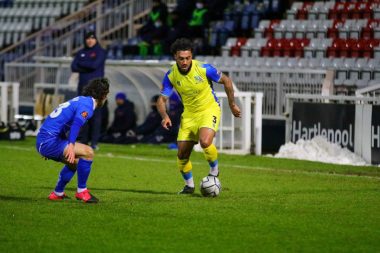 Jordan Cranston takes on his marker down the left flank. Pictures: Tom King.

MORE ruthless play in both penalty areas is being sought by Solihull Moors manager Jimmy Shan after Tuesday night’s 2-0 defeat away to Hartlepool United.

Moors were dealt their seventh National League defeat of the season at the Super 6 Stadium, going behind to Luke Armstrong’s 11th-minute opener before David Ferguson boosted promotion-chasing Pools’ advantage 12 minutes into the second half.

In the aftermath of a result which leaves Solihull 14th in the table, albeit with several games in hand on the sides above them, Shan has labelled Saturday’s home encounter with strugglers Barnet as a must-win affair.

“There were some nice moments in there, but we won’t win games if we’re nice – we have to be cut-throat in both boxes,” said the Moors boss.

“We have to be really aggressive and concentrate on defending our 18-yard box, but also be ruthless in the opposite penalty area.

“You don’t get any easy game at this level. I think we’ve been caught at times this season looking at the size and names of clubs, where teams are in the league, and that’s affected our mentality going into games.

“We’ve got to make sure that we’re at the forefront and at our absolute best with and without the ball.

“We’ve got to get three points on Saturday, it’s simple.”

Stepping into the team for a first start in three months was Adam Rooney, one of three changes alongside the returning Joe Sbarra – a late goalscorer in Saturday’s 1-1 draw at Eastleigh – and Cameron Coxe.

The complexion of the game could have been so much different had an early blast goalwards from Jamie Ward found the back of the net – the ball skimming past the far post of Ben Killip’s goal.

But while Rhys Oates went close to ripple the side netting after latching onto Ryan Johnson’s header into his path, the hosts did hit the front moments later after Armstrong buried a clear opening which left Ryan Boot helpless.

To the credit of Moors, the response was a positive one to falling behind, creating opportunities which required more clinical finishing from Alex Gudger and Sbarra.

An equaliser almost surfaced when Ryan Johnson inadvertently headed against his own crossbar after Jordan Cranston’s corner-kick delivery, whilst Rooney’s leveller ruled out for offside provided another point of frustration.

A single-goal separated the sides at the break but it was almost all-square within seconds of the restart, Rooney again involved but this time denied by an excellent block.

The second goal arrived as a real hammer blow just as Moors were building momentum in the contest, falling further behind to David Ferguson’s angled free-kick that flew into the top corner.

For all of the visitors’ subsequent efforts in the encounter, notably threatening through Ward and Howkins – the latter denied by a goal-line clearance – there was simply no answer to the lead that United had established. 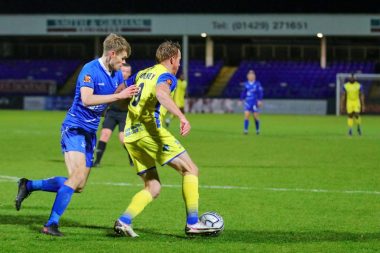 Shan felt that while his side matched their opponents in some aspects, other facets of Moors’ game were not up to scratch in the North East.

“One of the things I said to the boys in the build-up to the game was that Hartlepool are a high-energy team and it was important that we stripped that away and matched that – I thought we did that for large parts of the game,” he continued.

“They’re a high-pressing team. We had to have a mentality to manage the ball against pressure, but too many went hiding in the opening 20 minutes.

“The nature in which we conceded the first goal, I don’t think I’ve seen that in 17 years in youth development football, it was such poor decision making.

“After that a goal down, sometimes the pressure is off a little bit and I thought we grew back into the game. We had some decent spells and opportunities but didn’t defend direct play well enough.

“The only pleasing thing I can say is we are still creating chances, but I feel like I’m a broken record talking about [how we play in] both boxes.”