Moors must move on from Maidenhead, says Shan - The Solihull Observer

Moors must move on from Maidenhead, says Shan 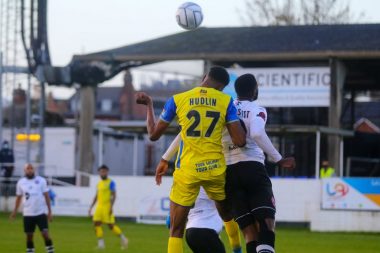 JIMMY Shan has urged his Solihull Moors side to put their Maidenhead United disappointment behind them and turn all focus to Sunday’s FA Cup first round battle at Scunthorpe United.

The Moors lost sight of their five-match unbeaten run with a 3-1 defeat at York Road last Saturday, with Stephen Gleeson’s 50th-minute opener from the spot being cancelled out by a hat-trick from the hosts’ Sam Barratt.

And while there was obvious disappointment after going down to a fellow side in the play-off places, Shan says Solihull must deem the result as history going into their headline clash with League Two opposition this weekend.

“We can’t get too high with the highs and too low with the lows, and we must put that result to bed now,” he said.

“We have to have that bounce-back ability like we had on the opening day against Woking, and put all preparation into that FA Cup tie against Scunthorpe.”

“If you look at it, we can speak about trying to gain control of the game and impose what we wanted to do – I thought we did that very well.

“Certainly in the first half, I thought we had total control in the last 20 minutes. We started the second in the same fashion, but I could talk all day long about it, it’s about both 18-yard boxes and us not being clinical enough in either.”

With one of Solihull’s shortcomings leading to the scoreline being overturned, Shan is intent on making sure the same problems do not arise going forward.

“The thing I’m disappointed with is the nature of the two goals – forget the third one because it’s right at the death and we’re chasing the clock – but the two goals are mistakes from us playing from the back,” said the Moors boss.

“You end up coming off as a manager, as a coaching or as a playing staff thinking you’ve got done playing out from the back.

“I thought we were very poor with our offensive balance, they looked a threat on the counter, they’ve countered more often than not with us having some really good entries into the final third. We went to sleep – that’s very unlike us – we should always should be thinking about getting numbers back.” 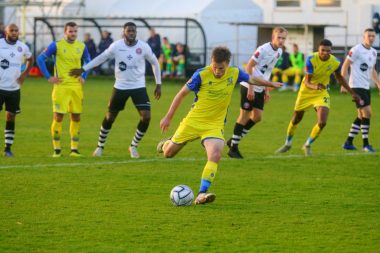 Moors had a new look to their starting XI in Berkshire, with midweek arrivals Kyle Hudlin and Krystian Pearce both in the side – while fellow signing Justin Donawa assumed a place on the bench.

Former Solihull forward Nathan Blissett reminded his old side of his threat when lashing a strike from distance that needed to be tipped away by Ryan Boot – Moors’ visiting custodian also clawing away a Dan Sparkes free-kick.

Hudlin was in the thick of the action down the other end to bring Callum Maycock into play – the Coventry City loanee forcing a save from Taye Ashby-Hammond – before the towering new recruit headed just past the post from Jordan Cranston’s resulting corner.

The 20-year-old was at it again to draw a low stop from Maidenhead’s goalkeeper just before the break, as the half ended goalless.

But when a foul on Cameron Coxe allowed Stephen Gleeson to smash home his first Moors goal from 12 yards, it was the perfect start to the second period for Solihull.

What the visitors did not expect was to back on level terms so quickly, as Barratt’s long-range drive whistled into the bottom corner on 56 minutes.

Pearce almost set up a second go-ahead goal for Moors when flicking on Cranston’s corner-kick delivery, but both Tyrone Williams and Hudlin were unable to convert heading into the final part of the game. 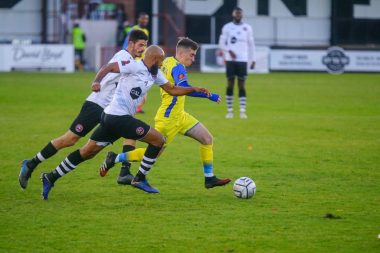 With seven minutes remaining, a handball call on Williams allowed Barratt to slot home from the spot and put Maidenhead in front for the first time.

Even with James Comley seeing red for a second yellow card offence on Kyle Storer, Barratt was on hand to enact more misery in the third minute of stoppage time with another penalty to wrap up his hat-trick and the points for United.

Seventh-placed Solihull have no midweek fixture, but go up against a Scunthorpe side that occupy second-bottom in League Two and who will have gone two weeks without match action come kick-off at noon this Sunday.