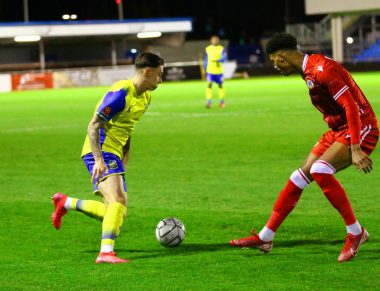 JIMMY Shan has challenged his Solihull Moors side to instigate an instant revival of their National League fortunes when taking on FC Halifax Town on Tuesday night.

Moors were beaten by a Michael Cheek goal in first-half stoppage time en route to a narrow 1-0 loss against Bromley last Saturday – Solihull’s first loss on home soil this term and their fourth league defeat in all.

Leaving them 16th in the table – albeit with a number of games in hand on the sides above them – Shan is expecting a response of sorts when The Shaymen visit the SportNation.bet Stadium.

“The frustrating thing for me is that it’s back-to-back [defeats],” said the Solihull manager – in reference to the Bromley and Sutton United losses.

“We might look at that and see that we had a lot of possession, but was it purposeful and did we ask enough questions in and around the final third – my first observation would be no. 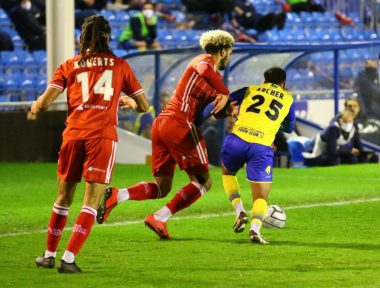 Moors went into the weekend’s fixture boosted by the news of Adam Rooney’s return – the striker appearing for the first time since his goalscoring contribution in a 4-0 FA Cup win over Wrexham six weeks earlier – while Joe Sbarra, Cameron Coxe and Darren Carter also came into the side.

A lay-off from Rooney teed up Sbarra for the first effort on goal, albeit one that failed to trouble Bromley ‘keeper Mark Cousins, before the Irish forward unleashed an overhead kick that lacked direction moments later.

Down the other end, Moors shot-stopper Ryan Boot had to be alert to bat away Cheek’s near-post, then doing well to keep a firm grip on Reeco Hackett-Fairchild’s hit on the half-hour mark.

Then, in a double blow before the break, the sight of Rooney being forced off through injury was followed by Bromley’s match-winner.

After Chris Bush whipped a low delivery into the hosts’ penalty area, Cheek met the cross with real force to beat the Solihull ‘keeper and find the net – despite Boot getting a hand to the shot.

Shan’s side attempted to find a way back into the contest but were often undone by a lack of concentration in making the final pass.

Substitute Jamie Ward went close to restoring parity when coming inside from the wing before unleashing a fizzing drive towards goal, the ball taking a deflection which failed to deceive the alert Cousins. 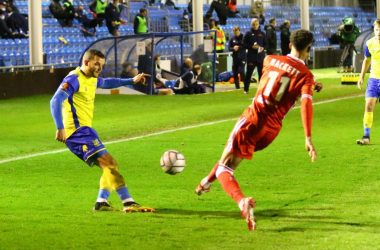 The 34-year-old Northern Irishman remained a danger to the visitors’ backline and had strong appeals for a penalty turned down, after his run to meet Jamey Osborne’s cross was cut short.

But it became clear that it was not to be Solihull’s day when a final chance from close range from Callum Maycock failed to find the net, resulting in Moors 100 percent home league record being tarnished.

Assessing the result, Shan said: “I don’t think we started the first 45 minutes well – both with and without the ball – we were bitterly disappointing.

“I think we had a lot of time on the ball and they sat off us and made it very compact, which was difficult to play between the lines.

“There was a lot of space to play in front of them and we didn’t circulate the ball quickly enough to exploit space and open up gaps – we were really sloppy with our detail.

“We have to take risks. You’ve got to play one-versus-one, you’ve got to ask questions with crosses, with shots – and we didn’t do that, we played a little bit too safe in the final third.

“Our offensive balance has to be better.”