SOLIHULL Moors Ladies chairman Alex Alexandrou says all of the signs are there to suggest the club can continue building with a view to reaching the higher levels of the women’s game.

Sitting fourth in the FA National League Division One Midlands – the fourth tier of women’s football – at present, Moors have already enjoyed a historic campaign having reached the first round of the Vitality Women’s FA Cup for the first time.

With all attentions turning back to league matters, starting with a trip to Boldmere St Michaels on January 17 for the opening fixture of 2021, Alexandrou says the club are constantly looking to the future with their ongoing operations.

“We want promotion, we’re aiming to get promoted to tier three and then we’ll see where we get to from there,” he said, speaking to the What the Footie Podcast.

“We’ve set a goal of getting the foundations and a strong squad in place and moving on.

“We’ve strengthened – in effect two players for each position and competition for places – a development team playing in one of the reserve leagues and our results have been very good so far this season.

“We made history by introducing our youngest ever player, Milly Woodman-Booth – who has just turned 16 – she’s the first product of our pathway and is part of our first team set-up, so there is substance to what we’re saying and our actions on and off the pitch.

“Milly is the first example of that, but there will be others.” 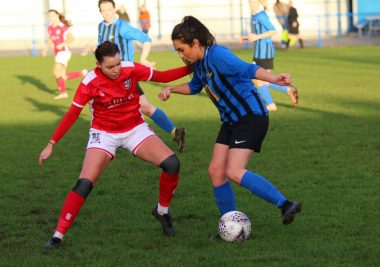 And with a footballing ethos within the club that extends to bettering the Moors’ female players as people, and from a mental health standpoint, Alexandrou believes Solihull are going down the correct path in the pursuit of future success.

“What we’re trying to do is break down barriers, because there are a lot of barriers to girls and young women being involved in sport – body image and so on,” he continued.

“We want to break those barriers down, and the best way to do it is to offer them a friendly environment where they can learn, play football, and enjoy playing it without any pressures from outside.

“Two new initiatives that we’ve introduced this season and next season are that we’ve got a development team – which is one of the bridging teams – for girls who play up to age 16, but who are too young and need a bit more experience before they get into the first team set-up.

“On top of that, the current under-16 team will stay together next season and create an under-18s team – the second bridging team.

“So we’ve got a complete pathway between the age of three to four, all the way up to the first team, in a manner in which girls can progress at a nice steady pace through the age groups without too much pressure.”