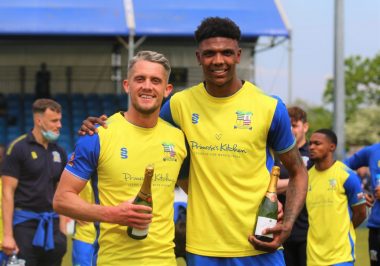 TRIPLE award winner Kyle Hudlin pointed to his persistent belief in his own ability behind his successful season, having made a considerable impact in his debut National League campaign.

The 20-year-old ended the term on a high by starting in Moors’ 2-0 final day win over Eastleigh on Saturday – in which James Ball and Joe Sbarra netted to end the visitors’ play-off ambitions – capping a season in which he netted 11 times in all competitions for 11th-placed Solihull.

To top it all, the towering six-foot, nine-inch forward was crowned joint-top goalscorer alongside Ball, as well as taking the Young Player of the Season and Goal of the Season prizes after the full-time whistle at the Sportnation.bet Stadium.

With a hat-trick of accolades to highlight the remarkable campaign Hudlin has had since making the move from Midland League club Solihull United back in October, the young gun feels he has provided the perfect first glimpse of his talent.

“I didn’t expect to get all of those awards, but I’m grateful for getting them,” he said.

“I feel like I’ve had a good season considering where I’ve come from.

“I always knew I had the ability to do it. I’m just so grateful to the club for giving me a platform and allowing me to showcase myself which I feel like I did this season.

“The supporters have seen that too, in terms of proving it to everyone else, so I’m grateful that I’ve done what I’ve done to back up my talk.

“I knew it was going to take a lot of patience to cement myself within the squad, and even when I did score a couple of goals I knew I still hadn’t confirmed my place.”

And having netted the majority of his goals since the arrival of Mark Yates in February, the forward believes the managerial change had a positive impact on him personally.

“He had a lot more trust in me, so I appreciate the opportunities that I got [from Mark],” Hudlin added.

“I’m glad that I’ve been able to show that I’ve got a wide range of goals [in me], I’m not just a heading man.

“I’ve got a bit of everything, I showed that I’ve been creative with the back heel against Notts County, that I can create my own piece of magic against Halifax.

“It’s pleasing that most of my goals have been vital ones, most have been winners.”

Re-iterating his desire to keep repaying the club for taking a leap of faith in snapping him up from Step Seven of the non-League ladder, Hudlin added: “I need to take [into perspective] the difference of levels from where I’ve come from.

“I didn’t understand how good of a season I’ve had to score the goals that I have.

“I’ve jumped six steps, if I was to do the same again it would be impossible, so it’s a situation where I’m overwhelmed and grateful for everything the club have done for me.”