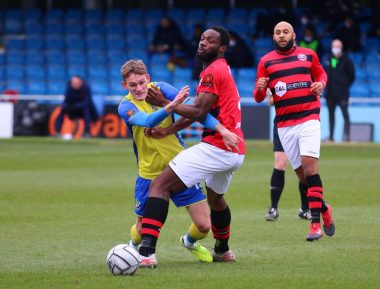 Callum Maycock is roughed up in an attempt to gain possession. Pictures: Richard King.

SOLIHULL Moors go into tonight’s National League home fixture with Stockport County hoping to arrest a run of form that has seen them pick up only one win in nine games.

A point in Saturday’s 1-1 home draw with Maidenhead United gave Jimmy Shan’s men a fair return for their promising display, after Jamie Ward struck for the hosts with seven minutes remaining to earn a share of the spoils – after former Moors man Nathan Blissett sent the visiting Magpies into a 29th-minute lead.

That result left Solihull 16th in the table, six points away from the play-off places – with two games in hand on the team that currently occupy seventh and the final play-off position, Eastleigh – after 23 matches played.

It will, however, be a tough task on their return to the SportNation.bet Stadium in tonight’s 7pm kick-off, given County’s position of fourth in the table – although Simon Rusk’s men are somewhat out of sorts with only two wins from their last eight outings, losing their latest fixture 1-0 at Weymouth. 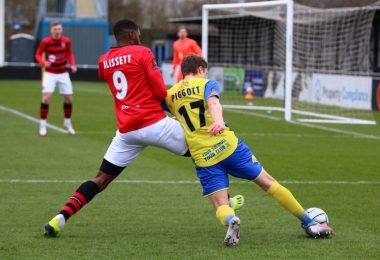 For Ward, the Moors hero in that Maidenhead meeting, fortunes will soon turn once his team begin to take their chances – and reiterates the need for Solihull to stick to their guns in terms of play style.

“We’ve got to take our chances, we’ve got to be relentless,” he said.

“We’re just not doing that at the moment, I don’t know why – things just aren’t falling for us.

“We do like to make it hard for ourselves, I think we’ve seen that for a while now.

“The gaffer preaches a way that he wants to play and for people who can deal with the ball, it’s a great way to play.

“We’ve got to all get on board with it and all be brave to take the ball in tight spaces, it’s a trust thing with each other but we’ve got to embrace it.

“We want to try and get out this league in the right way, things will turn – it’s just a matter of time.” 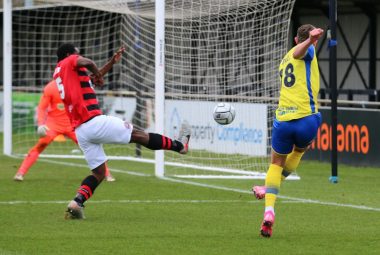 In terms of head-to-head meetings between the two sides, Moors have been the dominant side, drawing the last encounter 0-0 at Edgeley Park in October but winning the four games prior to that – an unbeaten run against Stockport stretching back to October 2015.

Shan is set to be without Mitch Hancox – serving the final game of a three-match suspension – whilst the fitness of Joe Sbarra is being monitored.

As always, the match is being broadcast online by the club’s streaming service for a £7.50 fee, which can be accessed by clicking this link.

Radio coverage for the game is also available by heading to switchradio.co.uk