Ryan Boot punches the ball away from danger. Pictures by Richard King.

While the showdown at the SportNation.bet Stadium failed to result in any goals on a blustery day in B92, Moors were rewarded with a fourth successive game unbeaten, a fourth clean sheet in a row, and a record of ten points from the last 12 available.

Having also seen off ten-man Barnet in Good Friday’s 2-0 victory, Solihull have had an extra spring in their step over the Easter period, something which Quinn attributes to the team’s overall work-rate.

“I don’t think we did enough to win the game, but on the other side of things I don’t think [Ryan] Boot had much to do,” said the 46-year-old.

“It was a very difficult game with the conditions, which turned it into a slogfest – but you’ve got to be happy taking a point.

“It was hectic, the ball was flying all over the place, there were a lot of restarts, so anyone could have nicked it from a set play.

“We knew they were dangerous going into the game, they’ve got pace and work hard, but I thought Tyrone Williams and Reiss McNally were fantastic dealing with their front two – and have been for the past four games.

“Jordan [Cranston] and Ben Usher-Shipway dealt with the wide men too, so it was a great effort by them, so a fourth clean sheet in a row shows how hard everyone’s been working.

“I think the lads have been absolutely unbelievable with all of the games that we’ve had in such a short space of time, the energy has been magnificent from them.”

Jamie Ward was the sole inclusion in Moors matchday XI, replacing loanee Ryan Barnett – who sustained a facial injury in Solihull’s victory at The Hive Stadium – on the wing for the hosts.

An energetic start brought saves at either end, Kyle Storer trying his luck within seconds of kick-off from range which forced Dean Bouzanis to tip over, while Isaac Olaofe failed to stay on his feet after rounding Boot.

McNally, a key figure in Solihull’s backline in recent weeks, demonstrated his prowess at the opposite end of the pitch with a fizzing shot that threatened to trouble Sutton’s custodian – but for a lack of direction which sent the ball aimlessly wide of goal. 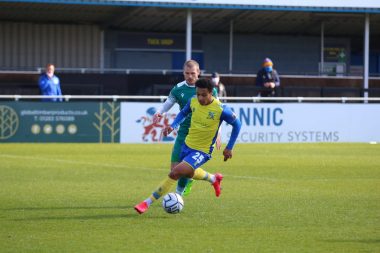 His defensive partner Williams was called into action to deny a certain goal, excellently reacting to hack Harry Beautman’s effort off the line and send the two sides in level at the break.

Chances were very much at a premium following the restart, albeit not for the lack of trying, as the strong winds and the defences of both sides ultimately came out on top.

Sutton were again denied heading into the latter stages of the encounter as skipper Kyle Storer showed bravery to make a last-ditch block, before threatening once more through Donovan Wilson’s blocked drive.

A stroke of luck nearly materialised for Solihull when Bouzanis’ attempted clearance upfield was charged down by towering striker Kyle Hudlin before rolling wide of the gaping Sutton net.

Then, with stoppage time looming, Craig Eastmond almost settled affairs – only for the ball to ricochet off Moors’ crossbar and rescue Mark Yates’ side.

With no fixture this weekend, Moors will have some downtime before their next outing against fifth-placed Notts County – something which Quinn believes the squad has earned after four games in ten days.

“We’ve now got a well deserved eight days off to hopefully get a back in because we’re down to the bare bones,” he added.

“They need a good rest, and after that they’ll back in and raring to go.

“We’ve never questioned their effort and commitment since the start of the season, and they’ve showed that again.

“They always get on with it, they work hard in training and in games – especially the last four – there’s a really good team spirit.

“They’re getting their rewards now from that hard work, so long may it continue.”