Moors cast Iron aside to reach FA Cup second round 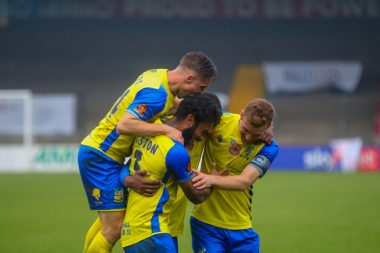 Krystian Pearce is submerged by his teammates after putting Moors back in front. Picture: Tom King.

SOLIHULL Moors will be in the hat for tonight’s FA Cup second round draw after eliminating League Two opposition in Scunthorpe United in Sunday’s 3-2 victory.

In reaching this stage, Jimmy Shan’s side have matched their previous best result in the competition and will make a third successive appearance in the second round.

Stephen Gleeson’s double from the penalty spot, in addition to Krystian Pearce’s looping header at the beginning of the second half, made sure of progress in Remembrance Sunday’s clash at Glanford Park.

All be told, Solihull were in control against the hosts from the first minute despite late pressure being forced when Kevin van Veen brought the deficit to within one goal in the closing stages.

For Shan, it gave a reflection of Solihull’s current standing, though the Moors manager remains keen to iron out the blips that almost gave Scunthorpe a route back into the tie.

“We made the last ten minutes difficult for ourselves,” he said. “We came off script a little bit which disappoints me.

“We’ve had that a couple of times this season where we’ve been in strong positions and enabled the opposition some momentum. 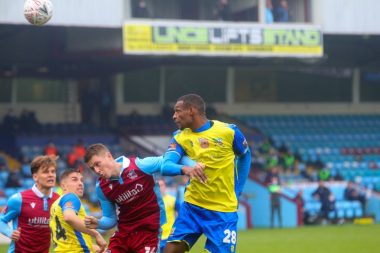 “We’ve come across a good outfit, held our own and won the game. We’re through to the next round of the cup, so the pleasing thing for me was the performance.

“The pleasing thing was the nature of the response as well. When we did concede the goal, it was how we responded up until half-time.”

Mitch Hancox and Joe Sbarra were the sole changes to the Solihull team that stepped out ready to commit a giant killing of sorts, one that became all the more possible when Cameron Coxe was brought down inside Scunthorpe’s box to earn a penalty.

Gleeson duly stroked the ball into the bottom left corner, giving the visitors a priceless lead on four minutes.

And while United ‘keeper Ben Howard was beaten again moments later, this time by Kyle Hudlin, the close-range strike was ruled out after the ball was ruled to have hit the hand of the new recruit.

In a turn of fate, the hosts drew level when John McAtee’s cross-shot evaded the pack of players inside the box and found the far corner of Ryan Boot’s net ten minutes later.

With a handful of half-openings during the remainder of the half, the restart brought a renewed feel to proceedings, with Moors starting the second period as they had the first. 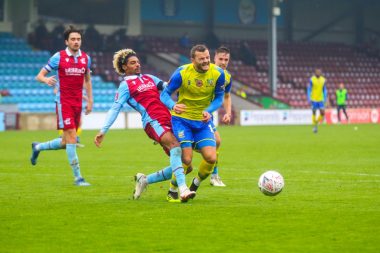 Six minutes into the half, the visitors had the lead they so craved once more, this time Pearce the man to provide the go-ahead goal with a smart header flicked high over Howard and into the far corner of the net.

Moors’ desire to kill off the tie was best evidenced by a blistering counter attack that had Shan’s side bursting forward in numbers, the end result a powerful blast by Gleeson that was well stopped by Scunthorpe’s goalkeeper after the Irishman was picked out by Sbarra.

Devarn Green forced a reactive save by Boot with his feet down the other end as the League Two side reminded Moors of their threat.

But with ten minutes to go, substitute Jamey Osborne earned Solihull a second spot kick that looked sure to seal their passage into the next round, with Gleeson finding the same corner as his first effort.

And while Boot clumsily played a pass straight to United’s Jordan Hallam, who squared for van Veen to lash home, Moors were able to see out the result. 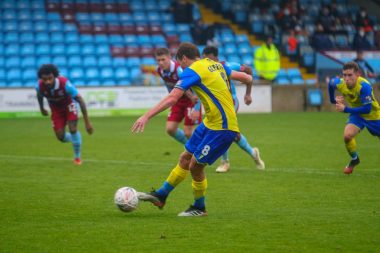 Scunthorpe ended the game with ten men after Tyler Cordner received a second yellow for a late foul on Jamie Ward, a dismissal which summed up the Iron’s afternoon.

With a trip to Altrincham on Wednesday night (7.45pm) next on the agenda, Solihull have little time to reflect on their cup heroics as attentions turn back to matters in the National League.