Moors call the Shots, with thanks to Gudger special - The Solihull Observer

Moors call the Shots, with thanks to Gudger special 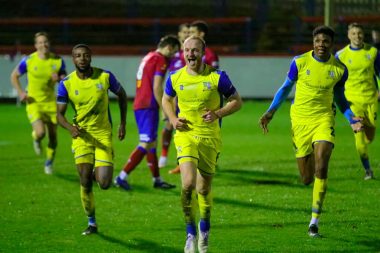 It has been a frustrating time of late for the Moors, be it a consequence of defeats to league rivals or postponed fixtures which have prevented momentum from building, but the comprehensive nature of the win at the EBB Stadium will have at least provided a timely reminder to the rest of the National League of Solihull’s true capabilities.

For Shan, it was an evening that provided him with many plus points to ponder – not least a goalscoring impact from Gudger which doubled the visitors’ advantage before the break, in the defender’s latest attempt to shake off a recurring knee injury.

“I think our first-half performance set the tone in terms of our intensity,” he said.

“The gutting feeling for me is that I felt we deserved a clean sheet.

“I’m buzzing for Alex, it’s been a difficult journey back for him, he’s had his frustrations managing his injury but it’s great that he’s completed minutes again and contributed with a massive goal for us.” 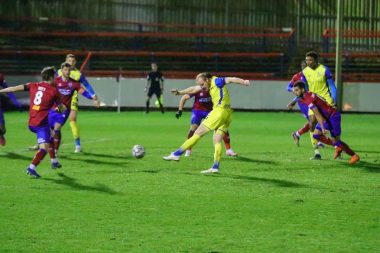 The 28-year-old’s strike was timely, arriving just before the break to double the visitors’ advantage. Pictures: Tom King.

And with a trip to another side who have had mixed fortunes of late in Weymouth awaiting on Saturday, the Moors manager is keen to back up the midweek success with more points on the road in Dorset.

“We’ve had our misfortunes on our travels, but I think one thing I need to be mindful of is that the team have remained consistent with their work ethic and endeavour – hopefully this kick starts our season,” Shan added.

“That was our sixth away game on the spin, so we’ve missed that home advantage and ability to get games in at home and build momentum.”

With defender Nathan Cameron suspended, Kyle Howkins was afforded a start in Hampshire, joining Stephen Gleeson in the team as the two Solihull changes made to the side that were downed by Hartlepool United a week previously.

A bright start from both teams provided promise of plenty of goals in the mid-table clash, with an early breakthrough from Tyrone Williams only denied by a handball call from the referee.

Ward was keen to avenge the disallowed goal from the full-back, and duly delivered in the 17th minute when turning home Rooney’s threaded through ball.

While the goalscorer’s night was ended abruptly after sustaining an injury, handing Kyle Hudlin another opportunity to impress from the bench, the away side remained on the front foot.

A Jordan Cranston drive was kept out only by the frame of Mitch Walker’s goal, prior to Gudger’s thumping hit that flew into the net in first-half stoppage time.

Moors continued their hunt for further goals after the break and were rewarded with a third just after the hour mark, this time Rooney the provider with a shot that kept rising until hitting the roof of the net.

The strike appeared to have doused any resistance from the Shots, until a late consolation from Josh Rees blemished Solihull’s clean sheet, the final action of a night in which Moors rose three places to 12th.