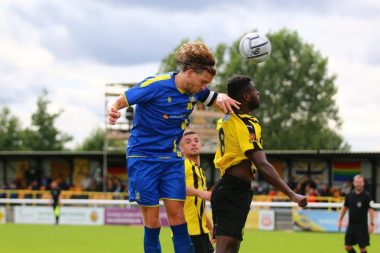 NEAL Ardley was pleased with Solihull Moors’ performance in their penultimate pre-season friendly as second-half goals from Ryan Barnett and Callum Howe saw off Leamington 2-0.

Moors included new boys Danny Newton and Lois Maynard, but were frustrated by their National League North hosts in the opening half at the Your Co-op Community Stadium.

However, they were able to make the breakthrough 10 minutes into the second half to keep an unbeaten pre-season intact.

“First half I thought we were a bit slow, along with the pitch. Although we were in control we didn’t really make anything happen,” said boss Ardley.

“But then in the second half we talked about upping the tempo, and in the end we played some really good stuff and probably should have scored more.

“It’s great for me seeing the players and seeing who fits into what systems, who copes well, but more so that if we need a change during a game for whatever reason, the boys are up to speed with it.”

New recruit Maynard, who has joined on a season-long loan from Stockport County, had to be replaced following an eye injury after half-an-hour but Moors struck 10 minutes into the second period.

Joe Sbarra’s mazy run conjured up the breakthrough goal, drawing a save from the Brakes’ goalkeeper Dan Jezeph but only into the path of Barnett to sweep home.

With a quarter of an hour remaining, it was 2-0 as Sbarra’s corner put the ball on a plate for Howe to thump home a header at the back post.

Moors take on league rivals Notts County on Saturday at the SportNation.bet Stadium in their final pre-season fixture, before the National League season commences away to Dover Athletic next Saturday.