Loan ace Harry out to shine at Moors - The Solihull Observer

Loan ace Harry out to shine at Moors 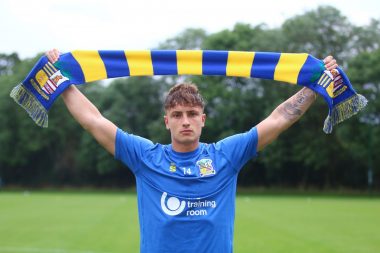 Harry Boyes will provide an attacking threat on the flanks next term.

NEW Solihull Moors man Harry Boyes is keen to step it up to the next level, following his loan move from Championship side Sheffield United.

The 19-year-old, a forward-thinking full-back by trade, has signed until January 3, 2022, and will be looking to build on a positive spell at National League North side Bradford Park Avenue last season.

Attracting the attention of manager Neil Ardley following his performances at the Horsfall Stadium, in addition to some eye-catching performances for the Blades’ table-topping under-23s side last term, the former Manchester City academy product says he cannot wait to get going with Moors.

“I’m really excited to be here, the lads have welcomed me and I’m looking forward to playing and doing my best for the club,” said Boyes.

“I enjoyed playing men’s football [for the first time] last season with Bradford Park Avenue, so I want to kick on again here and see where it can take me.

“I’m an attacking full-back, I love to get forward, get crosses in and I love a good shot as well.

The deal includes no recall option for his parent club Sheffield United, whilst cup permissions are yet to be confirmed between the two sides.