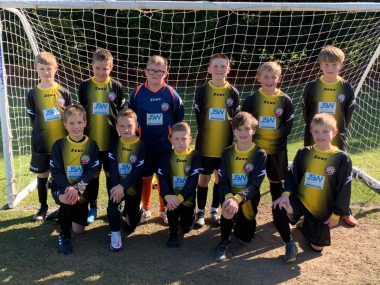 A GENEROUS move by Birmingham-based contractor J S Wright has allowed Leafield Athletic City’s under-10s side to kit themselves out for the remainder of the season.

The seven-a-side team, who play in the Central Warwickshire Youth League, have been provided new playing kit by the Midlands mechanical and electrical services provider – set to be worn upon the resumption of grassroots football after current lockdown restrictions come to an end on Wednesday.

Produced by Zeus, the new shirt bears a striking gradient design in the club’s yellow and black colours, meaning Leafield are set to stand out wearing their new kits – which adorn the logo of J S Wright as the team’s new sponsor.

While Leafield’s current crop have become acquainted since their days playing under-7s football, team manager Peter Burke says that the new strips will provide a welcome boost to the confidence of his side.

“The team love the look, lightness and fit of their new strip,” he said.

“It has made them all feel a bit taller and given them a better sense of togetherness as they look forward to playing matches again after the lockdown.

“As an FA-affiliated club run entirely by volunteers, we provide football for teams from under-7s to under-35s.

“We’ve also played a wider role in the community by promoting fitness and wellbeing, which is why we have been providing home training sessions by video to keep the boys in shape during the interim.”

Associate Director at J S Wright, Terence McLaughlin, is no stranger to the side with son Niall turning out for the Tythe Barn Lane club, and admitted his pride to give back to both the club and the community, adding: “We are delighted to bring some community cheer to our region in these difficult times by sponsoring a junior football side.”