JORDAN McKenzie was the stoppage-time match-winner as his double guided ten-man Earlswood Town to an emphatic nine-goal thriller victory against Coventry Alvis on the opening day of the season. 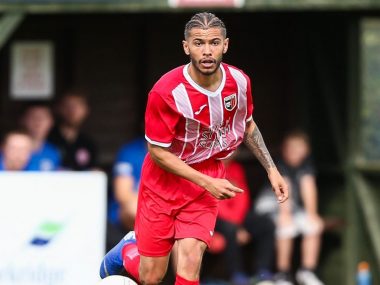 Jordan McKenzie had an afternoon to remember.

It was the perfect way to start the Midland League Division Two season after a six-month absence, with a red card and Alvis coming from behind to level twice adding to the last-gasp decider which thrilled the majority of the crowd of 56 spectators gathered at The Pavillions.

Despite the final outcome it was Coventry who hit the front on 15 minutes when Adam Bourn capitalised on Earlswood’s indecisive defence following a corner to fire home.

It was a lead which lasted a matter of seconds as McKenzie connected with a far-post cross by new signing Joe Wright to level instantly.

The goal fired up the hosts and it only seemed a matter of time before they went in front after further chances for the strike duo of Joel Hughes and McKenzie.

Hughes did take one of those opportunities in the 35th minute to give the home side a deserved lead, slotting home after Wright’s free-kick delivery caused havoc in the box.

And with a couple of minutes of the first half remaining, the hitman’s afternoon got even sweeter when he finished high into the roof of the net after cutting inside from Harry Street’s through ball.

Although Town held a comfortable lead at the break, their advantage was wiped out in the space of eight second-half minutes after a downturn in defensive solidity.

Dildale Linton was clinical when blasting home from a corner played low into the box in the 55th minute, followed by substitute Kier Mallen’s leveller shortly after following lacklustre defending.

The stunned Earls didn’t take long to respond however, hitting the front once more in the 73rd minute when Street nudged a rebound into the net after Hughes’ header was tipped onto the bar.

A red card threw a spanner in the works just when it appeared the hosts could begin to relax again, following a second yellow for the excellent Wright on what ended as a nightmare debut.

An Alvis equaliser in the 76th minute added further salt to the wound when super-sub Nathan Stoute headed in from close-range.

With the clock winding down, both sides tried desperately to snatch the three points – and it could well have been Alvis celebrating at the final whistle had a shot deflected onto the post by Earlswood defender Cameron Knight edged an inch closer to goal.

Fortune certainly favours the brave, so there were scenes of elation when McKenzie flew a 25-yard free kick into the far corner of the net to win the tantalising affair in style.

Tom Reynolds’ troops now make the trip to Northfield Town – who have started the season with 2-2 draw at Knowle and a 6-1 drubbing at Solihull United – on Saturday (3pm).