FOOTBALL: SUBSTITUTE Harry White was the hero for Solihull Moors as his penalty four minutes from time earned Marcus Bignot’s side another huge three points at Braintree Town.
A draw looked inevitable following a goalless 86 minutes before Andy Brown was brought down inside the area and White slotted home the resultant penalty to move Moors further away from the National League relegation zone.
Warm sunny conditions greeted Moors on their first ever trip to Braintree on Saturday but they were without the services of skipper Ryan Beswick and Nathan Vaughan, who were both injured, while Darryl Knights started the first of a three match ban.
Moors were looking for their first points since beating Southport at the start of October and they almost went ahead with just five minutes played but Akwasi Asante could not get a touch to Brown’s dangerous cross.
Akinola unleashed a terrific curler but it sailed over the bar for the hosts while at the other end Jamie Osborne collected another Brown cross but hit straight at Braintree keeper Sam Beasant.
The hosts were unlucky not to open their account on 15 minutes when Okimo put in a peach of a cross from the left but Barnard’s bullet header smashed against the crossbar and away to safety.
Jack Byrne’s corner was side-footed over the bar by Osborne and Shep Murombedzi forced a corner from which Omari Sterling James’ cross was headed on by Daly but Brown’s finishing touch went straight to Beasant. 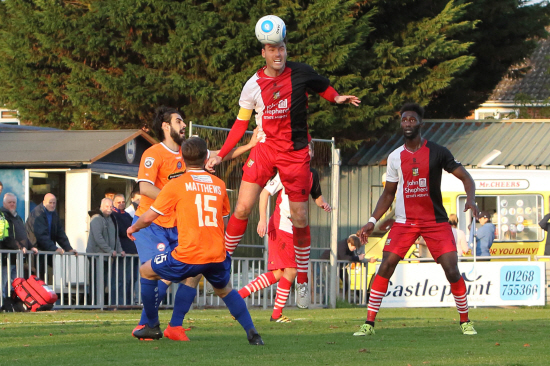 Braintree went close on 24 minutes when Muldoon’s effort was deflected but despite seeing it very late Danny Lewis saved majestically. Again the Moors shot stopper was ready at the far post for Patterson’s powerful header.
Jordan Fagbola shot over from 12 yards out and Barnard fired just wide but the scoreline remained 0-0 at the break.
Play resumed with both sides focussed on that elusive goal with Sterling James forcing a good punch out from Beasant as he fired from 20 yards.
The hosts should have taken the lead on 53 minutes when Akinola robbed Daly some four yards from the near post but instead of crossing to the unmarked Patterson with the goal at his mercy, he shot from an acute angle with Lewis saving with his legs.
White replaced Asante and Eddie Jones came on for Sterling James but Moors were still unable to find a breakthrough.
White’s shot after good work from Murombedzi was slightly off target and Daly headed Franklin’s long throw widem while Muldoon was also inches wide with his 20 yarder.
It looked as though a draw was on the cards but Brown had other ideas as his majestic run into the area ended by him being bundled over by Gayle.
Beasant guessed the right way, but he was unable to keep out White’s penalty kick which nestled into the corner of the net as Moors completed a ‘smash and grab’ victory.
A jubilant Moors boss Bignot said: “That is a massive three points and they will go a long way in terms of what will happen this season.
“I’m proud of what we are achieving as a group and there is a real positivity around the place.”
Moors now ready themselves for this Saturday’s FA Cup first round clash against League Two side Yeovil Town.