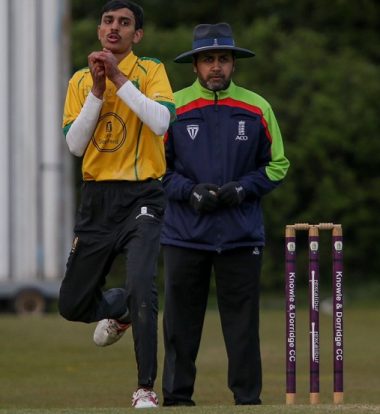 Fifteen-year-old Umar Shaikh was a revelation for Knwole & Dorridge in their Kidderminster win.

A SEASON-DEFINING win at Kidderminster was lauded by Knowle & Dorridge captain Jack Grundy after his side kept tabs on rivals and Birmingham & District Premier Division One leaders Berkswell.

After losing sight of their aim of completing their innings, K&D were confident of defending their 245 score and proved just as much by dismissing the hosts for 172 runs in the 44th over.

Part of that success was down to the visitors’ pairing of Chris Cheslin (3-39) and Umar Shaikh (3-40), who led the way for the Kidderminster decline and ended the afternoon with fond words from their skipper.

“We knew if we bowled well we could defend 245, and we contained very effectively with each new bowler that gave them no respite,” Grundy said.

“They put pressure on [M G] Pardoe and [Neil] Pinner, Aristides Karvelas (1-13) only giving up two runs per over made a massive difference.

“Chris bowled really well again, but it was Umar’s ability to dictate terms to two of the most experienced players in the league despite his young age, which was outstanding.”

A steady start by K&D at Chester Road was then propelled by a 64-run partnership in the middle order between Neil Dexter (44) and James Middleton (33) to take the visitors to 168-4.

Adding to the scoreline, Sam Reddish (27) and Adam Williams (25) provided more of a buffer over the 200-run mark, which would ultimately prove enough for victory.

Impressive 15-year-old spinner Shaikh took perhaps one of the most crucial wickets of the Kidderminster innings by claiming the scalp of Pardoe (43) – who was threatening to run amok after a promising start to life at the crease.

Knowle & Dorridge still had to contend with the hosts’ skipper Neil Pinner (51) later in the innings, though Shaikh was again on hand to provide the tonic needed to deal with Kidderminster’s danger man.