Impenetrable Moors make a point against Stockport - The Solihull Observer 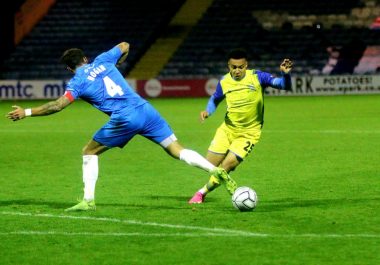 THERE was a feeling of what could have been for Jimmy Shan and his Solihull Moors side, after being held to a 0-0 stalemate by Stockport County on Tuesday night.

While Moors were unable to take all three points in a match that they started slowly, they did at least take satisfaction in extending both their unbeaten streak and run of clean sheets to five matches in all competitions.

And following Saturday’s 4-0 FA Cup qualifying triumph over Wrexham AFC which earned Solihull a first-round trip to League Two Scunthorpe United on November 7, Moors fans will ultimately be pleased with the progress that has been made early on this campaign.

For Shan though, the need for Moors to reach a consistent high standard in every outing is one that he will continue to relay to his team. 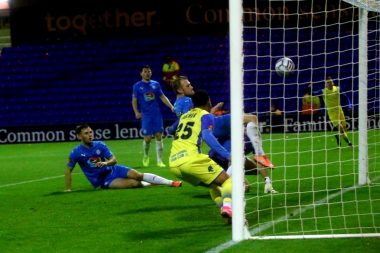 Cameron Archer’s deflected cross had to be cleared off the line. Picture by Richard King.

“I thought we grew into the game, with my standards and beliefs in way of playing I want that from minute one, not to take 55 minutes for us to gain trust in our structure and shape,” said the Solihull manager.

“We’re under no illusion that they were dominant first half, we weren’t quite at the races.

“I thought we were caught between different shapes. They had a lot of chances via set plays in the first half, they had some aerial threat, but it’s credit to the boys for enduring that kind of bombardment.

“It was a quick turnaround between the two games, but we know with our pace available to us that on the turnover we could be a threat.” 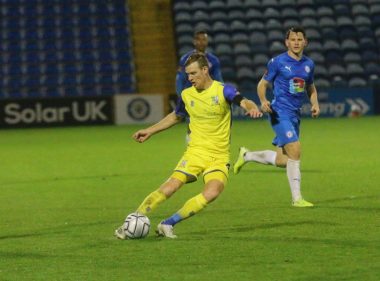 Hudlin was named as a substitute for the trip to Edgeley Park, but did not emerge from the bench.

County had the first opening in the game when Richie Bennett met a John Rooney corner-kick delivery with a firm header, drawing an assured save from Moors’ impenetrable Ryan Boot.

With the hosts enjoying a promising start, it was up to Solihull to stand firm and put bodies on the line – Mitch Hancox epitomising this approach with a stunning block to deny Liam Hogan.

A counter-attacking set-up led to some close run-ins for the visitors down the other end, a deflected cross by Cameron Archer having to be cleared off the line.

Stockport ended the half strongly with attempts from Bennett and Alex Reid both striking the crossbar, as the game somehow remained goalless at the break. 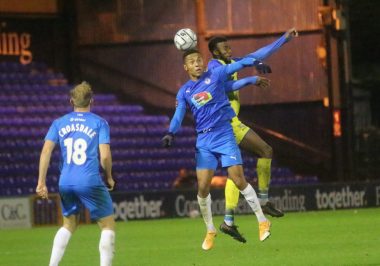 Tyrone Williams competes for the ball. Picture by Richard King.

And despite James Ball and Archer going close to breaking the deadlock after the break, that was how the scoreline remained at full-time.

Shan was evidently pleased with another fine defensive display in Greater Manchester though, adding: “It’s something that we pride ourselves on, we keep looking to be dominant in possession – if you do that then you reduce the opposition to chances.

“We didn’t do that as well as we could, but we came away with another shutout. When you shut the backdoor it always gives you an opportunity to take something from a game.”

Fifth-placed Moors will be hoping for a sixth successive clean sheet, albeit with another three-point haul chalked up in the National League table, when visiting Maidenhead United – who are ninth – on Saturday (3pm).