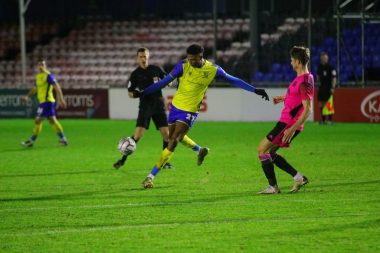 MATCH-WINNER Kyle Hudlin says he must use the stunning goal that downed FC Halifax Town to push him on in search of a regular starting place – following Tuesday night’s 2-1 victory.

Having opened his Moors goalscoring account at the end of November in the 4-2 defeat to Morecambe, the 20-year-old registered his first strike in the National League in style, touching down a long ball before zipping a half-volley into the top corner from 25 yards out.

The 56th-minute goal was just the tonic that Solihull needed, helping complete a comeback after James Ball instantly ruled out Martin Woods’ first-half opener, and put an end to two successive defeats in the process.

With Jimmy Shan’s charges back on track, Hudlin is aiming to provide Moors with the perfect replacement for Adam Rooney – who limped off at the weekend on his return from injury in the 1-0 loss to Bromley – and establish himself in the starting XI.

“Words can’t describe it,” said the striker on his midweek stunner.

“Any other day I probably lay it out wide and get into the box, but I’ve just decided to hit it on the half volley and it doesn’t get much sweeter than that.

“It’s my first league goal, so that’s set the standard, I don’t think I’ll ever top that one. 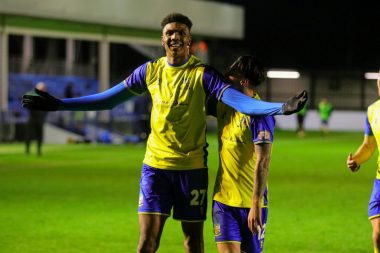 “I believe it’s now my time to try and step up and claim my place in the side. He’s [Rooney] a big name within football and I love learning from him in training.

“It’s now about using what he’s taught me, and my own ability, to push on and cement my first-team spot.”

Three changes were made by Shan prior to kick-off, with Mitch Hancox, Ball and Hudlin all restored to the side.

It was a regular fixture in Stephen Gleeson, however, who almost made the breakthrough for the hosts, testing Sam Johnson with an audacious lob from 40 yards.

Unfortunately for Moors, it was the Shaymen who dealt the first blow, Woods getting the better of Solihull custodian Ryan Boot when a deflection guided the midfielder’s shot into the net on 21 minutes.

Shan and Co. need not have feared though, as Ball capitalised on defensive uncertainty to gratefully blast home the leveller three minutes later.

Halifax’s Luke Summerfield troubled Boot with a shot that looked set to loop in, until the fingertips of the Moors goalkeeper touched the ball away to safety, as the visitors began the second period brightly.

Another Summerfield attempt put the hosts under further pressure, before the defining moment of the evening arrived. 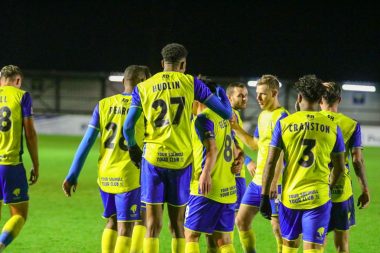 Solihull managed to see the game out for their sixth victory this term. Pictures: Tom King.

With a long ball raked into the path of the towering Hudlin, the young striker controlled the pass, swivelled on the ball before sniping a scintillating half-volley into the postage stamp.

While the go-ahead goal calmed the home side somewhat, they were still susceptible to Halifax attacks, with Boot again deserving of plaudits for his stop to deny Danny Williams.

The final result could have been completely different had Neil Byrne’s header creeped inside the post in stoppage time, but Moors held on for a sixth league win this term to climb to 11th.

That determination to grind out another three points on the board was best optimised by the Solihull hero himself, with Hudlin adding: “The main focus was getting the result, we grinded it out to the end.

“It’s not the football you’re used to seeing from us, but it was the kind of football that needed to be played to get the result.

“We showed we could do both sides of the game – we’re not just a footballing side although that is our philosophy.

“After the results that we’ve had, I feel that we had to come back and had to show character – I believe those characteristics pushed us through – I knew we had that within the side.”

Next up for Solihull is an FA Trophy third-round tie at home to Farsley Celtic – who ply their trade in National League North – on Saturday.