Having ten men made us play the Moors way - Shan 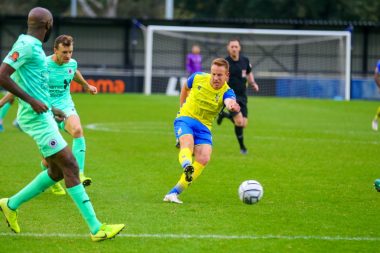 A FIRST Solihull Moors goal from Adam Rooney fired his ten-man side to a slender 1-0 victory over Boreham Wood in the National League on Saturday.

It was the Moors’ third victory on the spin, ensuring the perfect response to their opening-day loss at Woking, with the latest three points coming as a relief to 32-year-old Rooney – who provided the perfect impact in a competitive debut for the club that was 218 days in the making.

Seven months after signing for the club, the Irishman picked up the ball and advanced to the edge of the penalty area, where he planted a low shot into the bottom corner of Nathan Ashmore’s net to win the game for Moors with 15 minutes remaining. 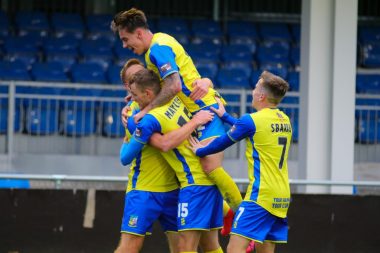 And perhaps the only man who was left equally as pleased by the goal, manager Jimmy Shan, only had words of praise for his side, who were left shorthanded for the best part of 70 minutes after Darren Carter’s dismissal for a second yellow card midway through the first half.

“It’s a fantastic result and testament to the character of the boys after going down to 10 men,” he said.

“I can’t take anything away from our lads. They’ve worked tirelessly hard and it was probably fortunate having that game postponed in midweek.

“I’d have hated to go into that game with ten men for such a long period of time, having playing 90 minutes on the previous Tuesday night.”

While most sides would be forced into reactionary measures with a man disadvantage, Shan instead reaffirmed the need for his side to stick to their gameplan – one which ultimately paid dividends at the full-time whistle. 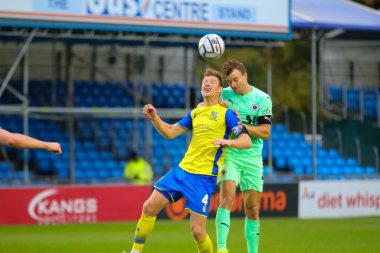 Kyle Storer gets some air time. Picture by Tom King.

“We changed shape (after the red card) but we don’t want to change the principles of play,” he added.

“The second half was totally different to that period we had when we played with 11 men. I think ironically when we had ten men, we started to gain some control in the game and started to play some football.

“We had that bravery and it almost kickstarted us to be a bit more like Solihull Moors.”

It was the visitors who enjoyed the better of the opening stages, Kabongo Tshimanga forcing the first save of the game – and a fine one at that – from Solihull’s Ryan Boot.

But with the hosts failing to find their feet, their task was made all the harder by a second yellow card for Carter, who made a clumsy challenge on Wood’s Corey Whitley to earn himself an early bath on 20 minutes. 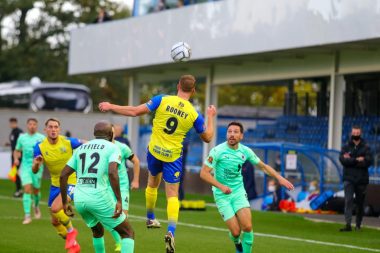 Adam Rooney leaps for a header. Picture by Tom King.

And it was the man he fouled who almost gave the visitors the lead, albeit for another fine stop from Solihull’s custodian.

Even with ten men, Moors began to grasp a foothold and went into half-time on level terms, before beginning to press on looking for a breakthrough goal after the break.

Boot had to deny Matt Rhead from netting at the beginning of the half, before Jordan Cranston registered drew Ashmore into a stop with a free-kick whipped goalwards.

Another Cranston free-kick drew a second save from Boreham Wood’s ‘keeper, as time ticked away towards the final quarter.

Rooney’s clinical finish lifted Moors’ belief of a win, with a late Archer opportunity saved by Ashmore to deny the rubber stamp on the three points.

Solihull turn attentions to an FA Cup fourth qualifying round tie with Wrexham on Saturday (3pm) – a fourth home fixture in succession for Shan’s men.