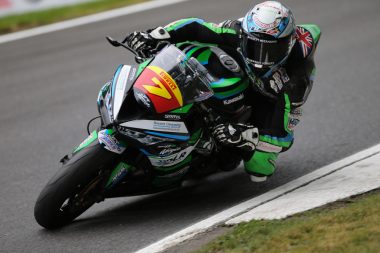 SOLIHULL’S Liam Delves admits he is content with his fourth-placed finish at the eighth round of the Pirelli National Junior Superstock Championship.

Taking to the Cadwell Park track, where the 21-year-old would end the day fifth in the drivers’ Championship standings, Delves felt the option to opt for dry, instead of wet tyres on a moist track ultimately paid off.

“We took the gamble on tyres hoping it would dry, lapping the back markers made the pass for third place impossible in the end.

“But fourth is a good result, so I have to give my thanks to my team for all the hard work throughout the weekend.”

Having qualified in the middle of the third row, Delves lined up on a drying track following a prior rain shower on Sunday morning and duly set off in fine fashion, finding himself seventh after two laps.

An error by George Stanley was then capitalised upon by the Solihull man to rise to sixth, at which point he found himself entrapped in a battle with four other riders to claim third place.

Delves even found himself third after the sixth lap when his rivals failed to contend with the difficult track conditions, but ultimately dropped down to fourth with two laps remaining.

Fighting for a podium place in the final lap, the JR Performance Racing rider lost momentum at a crucial moment and had to settle for fourth – crossing the line two seconds later than Zak Corderoy in third.

Next, Delves will head to Snetterton on the weekend of September 3 to September 5 for the ninth round of the Championship.