Hamer at the double for unbeaten Earls - The Solihull Observer

Hamer at the double for unbeaten Earls 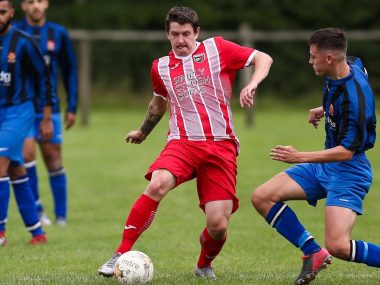 Tom Reynolds’ side had a far more straightforward task last time out, compared to their hectic 5-4 opening victory over Coventry Alvis, after seeing off Northfield Town 3-0 in their first away trip of the season last weekend.

Recording such a comprehensive victory so early on against the 2019 Division Two winners is a huge statement of intent, and the Earls showed just as much with the nature of their performance.

The visitors should have had the advantage within ten minutes at Shenley Lane when Jon Hamer teed up Harry Street to have a crack at goal, one which was turned away by the Northfield shot-stopper.

It was an early effort that preceded further attempts for Town, with Joel Hughes and Jordan McKenzie both at the forefront of the attacking play for the away side.

The hosts finally registered an attempt on 25 minutes, albeit a tame one, when Dan Farr got up to tip the ball wide of the post.

Then, on 33 minutes, Earlswood finally found the goal their play had merited.

A through ball from Jordan McKenzie was inch perfect, setting up Hamer for the simplest of finishes for the striker’s first goal of the campaign.

Northfield almost replied instantly but could only send the ball over the bar from a promising position, a chance which proved the last of the opening half.

As the game appeared to head towards its conclusion, it was not until the 78th minute when the points were finally safe for the visitors.

It was a fine goal to double Earlswood’s lead though, as Hughes latched onto Simon Quigley’s defence-splitter before feigning a shot and then lifting the ball over the grounded ‘keeper to win the game.

There was still time for the cherry on top of the cake when Hamer beat Northfield’s custodian to a backpass and then slotted into an empty net five minutes later.

It could, and probably should have been four, after a game of pinball inside the Northfield box resulted in blocked shots from substitute Matt Pemberton and McKenzie – while Farr had to be alert to keep his clean sheet intact late on.

This weekend’s opponents have already tasted defeat twice this season, going down to Alcester Town and Feckenham 2-0 and 3-2 respectively – a record that Earlswood will hope to add to come 5pm on Saturday.