FOOTBALL: SOLIHULL Moors have a fight on their hands to keep hold of two of their prized assets after rejecting offers for top scorer Akwasi Asante and midfielder Jamey Osborne.

The Observer understands that former manager Marcus Bignot has made offers for both players, both aged 24, as he looks to strengthen his Grimsby Town squad.

There have been other offers made from other Football League clubs for midfielder Osborne but all bids fall well below Moors’ valuation of both young players as they look to keep hold of their valuable duo.

Dutch striker Asante came through the Birmingham City Academy after moving to England when he was 13 and following injury-plagued loan spells at Northampton Town and Shrewsbury Town, he signed for National League side Kidderminster Harriers.

Asante made 11 appearances for the Harriers before making the move to Moors in May 2015 where his firepower up front helped guide Moors to the National League.

He has already bagged 12 goals in all competitions so far this season, which has included back-to-back hat-tricks against Maidstone and Southport. 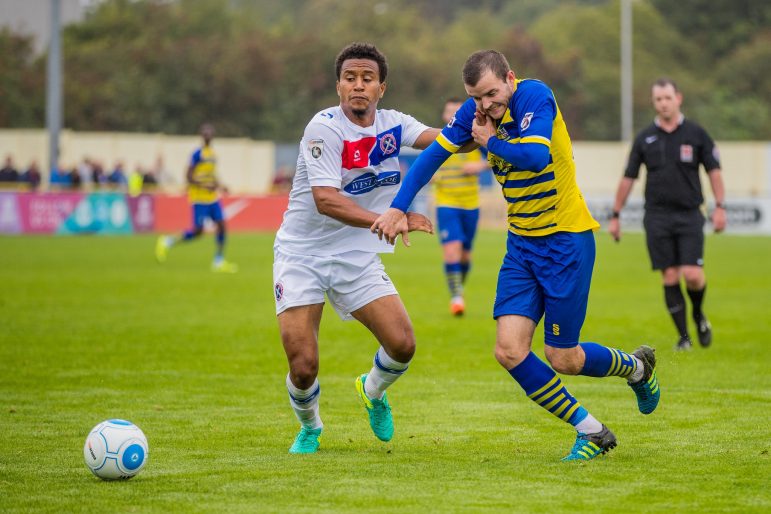 Osborne score his fifth goal of the campaign in last week’s 3-0 victory away at Chester and has been at Moors since joining from close neighbours Redditch United last summer.

Back-to-back victories over Chester have pushed Moors up to 15th in the National League and they now sit nine points clear of the relegation zone.

This Saturday they return to The Automated Technology Group Stadium to face Gateshead and manager Liam McDonald knows his side are in for a difficult match.

He said: “They have turned a corner since the goalless away match back in September and can rightly view themselves now as play-off contenders. They are on fire, especially since the 4-1 win over Barrow, but so are we!

“We are unbeaten in our last five league matches – we are proud of that and want to build on it.

“But we are not going to win or draw every match and must be realistic enough to appreciate the standard in this league. There will be games which we lose but so long as we acquit ourselves properly we will be able to take those in our stride.

“Our players believe rightly that we are capable of beating anyone and know they can make their own luck with displays such as last weekend.

“We know we are not the finished article but the will is there to work hard to improve. The lads know that I want them to play attacking expansive football which excites the spectators.”

Connor Franklin should be back in contention for Saturday after the concussion he suffered on Boxing Day and Luke Rodgers will be back after his three-game suspension.