SOLIHULL Moors have revealed their new badge to a mixed reception from supporters on social media as the club look to transition into a new era.

The new badge was developed with Solihull-based company CM Brand with the aim of achieving a clean and modern crest that is instantly recognisable and practical to use.

The new badge features a griffin’s head, lifted from the Solihull Coat of Arms, on the front and centre of the crest as the club hope to grow their profile in an ever-evolving digital and social media landscape.

Moors feel the new contemporary design reflects the progressive approach being taken across the entire club and will be used across all club branding with immediate effect.

However, many of the club’s supporters took to Twitter to vent their frustration at not being consulted on the new design. 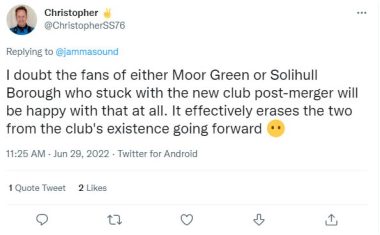 Please tell me kits haven’t already been sorted with this new badge. Current badge is great and completely recognisable. Another decision made by the club without consultation with the Supporters association.

There's no personality to the griffin. It's meant to be a mythical character with a lion's body & an eagle's wings. This could be any bird of prey… and it looks asleep.

To my eyes, the amount of negative space is all wrong too.

As expected, 99% of the Moors fans and opposition fans really don’t like it. I’m not against a new badge but surely the fans should have been consulted first? Always preferred the old badge #SMFC https://t.co/QC4cme4Q3l

The new crest replaces Moors original badge that has been used since 2007 when Solihull Borough and Moor Green merged to form Solihull Moors.

Solihull revealed their brand refresh process with a review of the crest undertaken with the aim of modernising it and creating more of a contemporary design.

The club feels the new crest will work across all channels and become instantly recognisable – something that the current mark struggles to achieve at smaller sizes.

And Moors also listed the requirements the new badge needed to meet as they strived to create a clean, contemporary and modern design.

What do you think? You can send in your thoughts to: sport@solihullobserver.co.uk