A PLACE on the podium at Silverstone was a just reward for Liam Delves in the third round of the Pirelli National Superstock 600 Championship last weekend.

The 20-year-old rode to a third-place finish on Sunday, lifting him into fourth in the overall Championship standings on 29 points – albeit 34 points behind leader Ben Luxton with five rounds remaining. 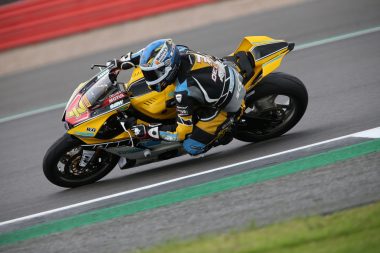 But if his showing in Northamptonshire is anything to go by, the evidence is there to suggest the Solihull man is capable of clawing back that deficit in the weeks to come.

Finishing fifth in qualifying gave a sign of things to come for Delves, who earned himself a place in the middle of the second row for Sunday’s starting grid.

A steady start meant a position of tenth after the first lap, allowing him to make an assault for the leading places as the race went on.

By the eighth lap Delves was as high as fourth, an ascent up the rankings which was only halted by the sight of a safety car two laps later.

But once proceedings got back underway on lap 15, he was overtaken by Championship leader Luxton, a change in the rankings which preceded a fine battle for the final podium place towards the race end.

Fortune favours the bold, so the sight of two of the leading riders in the penultimate lap was a sight to behold for Delves, who secured third for his first appearance on the podium this term.

Speaking post-race, the Yamaha racer said: “A massive thank you to all my team at TAG Racing for another perfect bike and a fantastic weekend, a special thank you to all of my sponsors for believing in me and making my dreams come true.”

Next up for Delves is a trip to Oulton Park on the weekend of September 18 to September 20, where twice as many points over the course of two races will have a big impact on the Championship standings.