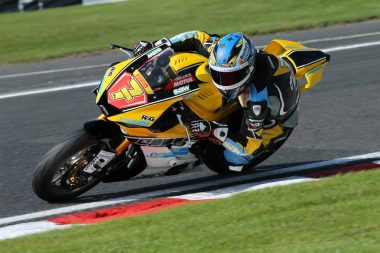 Liam Delves did well to battle back at Oulton Park. Picture by Dave Yeomans.

The Santander Salt TAG Racing rider did well to recover and record two credible results, considering he suffered a crash in the opening five minutes of Saturday’s qualifying session which had a knock-on effect for his starting grid placing over the course of the weekend.

Flying high in second at the time of the crash, Delves eventually finished fifth but felt the after effects of his meeting with the gravel when battling through the 12-lap opening race.

Starting from the second row, the Solihull man was unable to perform to his usual high standards and demonstrated that in his riding – although six valuable Championship points after his finish of tenth at least helped him feel some reward for the pain.

Sunday’s race was another frustrating one, given his demotion to the fourth row on the starting grid amongst a number of in-race incidents.

The first, the appearance of a red flag on lap six, halted his momentum just as he had moved up into 11th position, while a lengthy delay ruled that the race was to be re-run over a shorter distance of six laps.

Undeterred, the 20-year-old pushed on with real aggression as his mindset and game plan for the fifth round of the Championship were altered.

This approach reaped plenty of rewards, as Delves was as high as eighth in the rankings on the penultimate lap.

While he eventually fell a place behind after being overtaken by Joe Talbot in the sprint to the chequered flag by a tenth of a second, Delves will no doubt feel proud of his efforts to battle against adversity over the course of the weekend.

Each point at this point of the campaign proves enormous, a factor which is very much evident in the Championship standings, with Delves and fourth-placed Kawasaki rider Daniel Brooks both locked on 42 points each.

The penultimate round at Donington Park over the weekend of Friday, October 2 and Sunday, October 4 will no doubt have another considerable impact on those rankings, before the final two races of the season at Brands Hatch two weeks afterwards,