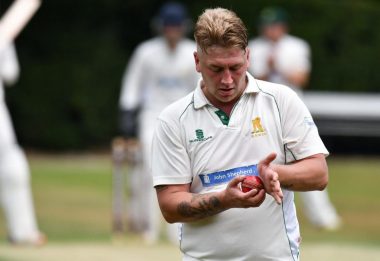 SKIPPER Jack Grundy said the result was never in doubt as Knowle & Dorridge got back to winning ways against Shifnal to keep the pressure on Birmingham & District Premier Division One leaders Berkswell.

The five-wicket success at Station Road last weekend may not have been a high-scoring classic, but it was day for the bowlers, with Chris Cheslin’s 5-26 the pick of the afternoon’s action.

Shifnal made a bright start with an opening stand of 62 between Jack Edwards (30) and Steven Leach (28) but, apart from 30 from skipper Chris Murrall, no other batter reached double figures as Cheslin and Neil Dexter (3-7) helped dismiss them for 133.

After losing their first four wickets for 33, and a fifth at 80, K&D were steered to a handy win by James Middleton (41 not out), Sam Reddish (38) on his 200th League appearance for the club and Adam Williams (21 no).

“It was a good toss to win, we backed that up by bowling well with the new ball to get control of the game,” said Grundy.

“Our rewards then came in the middle part of the innings when Chris bowled superbly.

“A spell like this has been coming for a few weeks as he has bowled well recently without getting the rewards.

“It was then a bit of a nervy start to the chase, but James and Sam showed their class and experience on a pitch which improved as the game went on, before Adam Williams played some good shots to finish things off.”

Second-placed K&D visit Kidderminster, third, next in a mouthwatering clash at Chester Road on Saturday.