Cards come up trumps to deny Moors on opening day 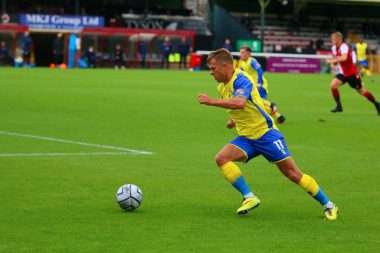 A DEBUT goal from new boy Jamie Ward was not enough to guide Solihull Moors to victory in a 2-1 defeat at Woking in their National League opener.

Saturday’s encounter looked to be going the way of the travelling Moors after taking an 18th-minute lead and dominating the remainder of the first period, but ultimately fell short after Max Kretzschmar and Kane Ferdinand struck in the space of seven second-half minutes.

It was a disheartening way for Jimmy Shan’s men to start the new campaign, having looked set to storm to victory at the Laithwaite Community Stadium. 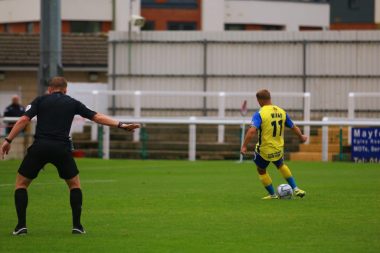 Solihull were shorthanded going into the clash with the Cards, missing key players in Adam Rooney and Jamey Osborne.

But with starting places available, an opportunity was afforded to Northern Ireland international Ward, who made an impact right from the start.

After another international star in Cameron Coxe – who turns out for Wales’ under-21’s side – went close with a left-footed drive that was sent wide, 34-year-old Ward went closer still with a cross-shot that none of his teammates were able to turn home.

But when the bright Coxe went down inside the penalty area, a spot kick allowed his fellow debutant to crash home from 12-yards to give a deserved lead on 18 minutes. 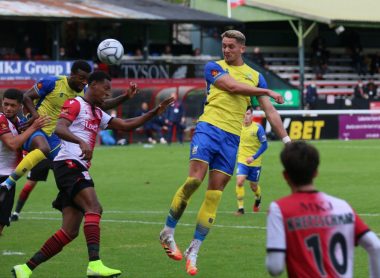 The hosts came back into the contest after the goal with a couple of half chances, while Ryan Boot was forced to tip a long-range attempt over the bar.

Down the other end, Coxe fed an incisive through ball to Joe Sbarra to drive in a tantalising cross, one which Ward nodded off-target.

It was the final opening of a promising half for Solihull, though they could not have seen the turning of the tide which hit them in the second half.

Woking seemed to have awoken from their slumber after the intveral and began to apply more pressure to the visitors.

And soon their approach paid dividends, after winning a corner which Josh Casey swung onto the head of Kretzchmar to head home a 53rd-minute equaliser. 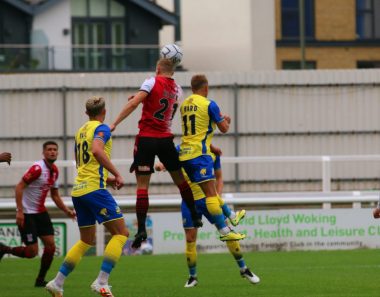 Action from Moors’ defeat at Woking. Picture by Richard King.

From there, matters went from bad to worse for the shell-shocked Moors.

First, Ward was forced off after pulling up with an injury when chasing a loose ball – allowing Aston Villa loanee Cameron Archer the chance to enter the fray for his debut.

Then, on the hour mark, Solihull fell behind when a move down the left wing led to Ferdinand being allowed the space to touch home a go-ahead goal.

Charlie Cooper went agonisingly close to putting the hosts out of sight with a deflected free-kick that had Boot sprawling – forcing the Solihull goalkeeper to perform heroics to tip the ball away. 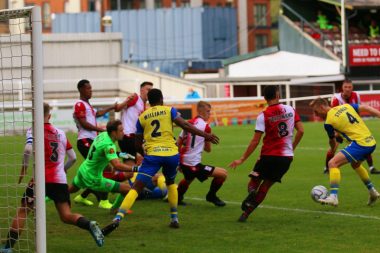 Action from Moors’ defeat at Woking. Picture by Richard King.

The closest that Moors came to a leveller was an attempt by Jordan Cranston which curled goalwards, only for Craig Ross to keep the ball out with an excellent save.

Shan’s side must put their opening-day heartache behind them and will attempt to right their wrongs when hosting Wrexham on Tuesday night (7.45pm).