Barnet clash to go ahead behind closed doors 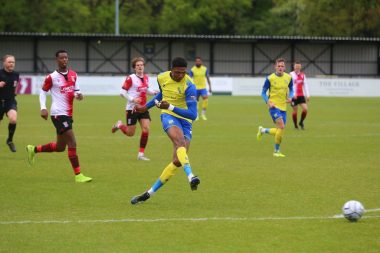 WHILE Solihull Moors fans were denied a first glimpse of their team this season following the postponement of last night’s National League encounter with Barnet, there was plenty to smile about after yet another home win over Woking last weekend.

Emotions at the SportNation.bet Stadium were palpable in midweek, with plenty of justification when considering that the Moors were set to be backed by supporters for the first time since March 2020 – only for a waterlogged pitch to deny the Solihull faithful that opportunity when the referee called off the match at 7.45pm.

In the latest example of the struggles that the club have encountered this term in battling the elements to allow play to go ahead, Moors fans will now have to wait until their May 29 home clash with Eastleigh to return to familiar surroundings, with their meeting with Barnet now to be played behind closed doors tonight.

In spite of this, positives on the pitch in recent weeks continued last time out in the form of a third successive win and the extension of Mark Yates’ unbeaten home record since returning to the Solihull dugout – which now stands at eight matches – after goals from Kyle Hudlin and Adam Rooney.

For the man behind the 2-1 victory, there was a hint of reluctance to accept the nature of Moors’ showing, but he conceded that his side showed quality to come through the game on the winning side.

“We got away with it to be honest, I said to them that we needed to be better than that,” said Yates.

“At home we have been, but for some reason even though we scored and started on the front foot, we just allowed them back into the game and have too much of the ball.

“But they showed character and that they have something about them late on, with Hudlin coming on and doing what he did.

“Every time we press we look a decent team, but I think the lads genuinely looked tired.”

Given the fact that Moors went ahead after just five minutes, it would have been easy to believe that it was to be a straightforward afternoon for the hosts. Rooney’s clinical finish from a matter of yards came after Alex Addai’s jinking run down the right flank and cut back to find the Irishman for his seventh goal this term.

But for all of Solihull’s positive play, it was almost for nothing when Tyrone Williams conceded a penalty on 21 minutes – a superb low stop from Boot sparing the defender’s blushes.

While Woking were denied in the first half, they found a route to an equalising goal after building momentum after the interval, levelling through Nathan Collier’s header with 11 minutes remaining.

With Solihull searching for a hero, substitute Hudlin provided yet another moment of magic – and his fifth goal in as many games – by burying a sumptuous hit from the edge of the penalty area four minutes later.