A SHUFFLING of the pack has taken place at the SportNation.bet Stadium after Solihull Moors manager Jimmy Shan announced his backroom staff for the forthcoming 2020/21 campaign.

Following Wednesday’s announcement of an extension to Darren Carter’s contract, which allows the 36-year-old midfielder to make himself available to the team in a player-coach capacity, the rest of Shan’s team have also been announced, with Richard Beale, James Quinn, Kevin Poole, Elliot Turner, James Ross, Megan Reesby and Robin Lamb completing the set-up. 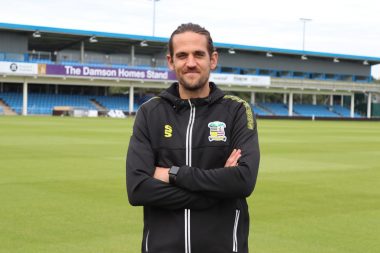 Darren Carter will remain an active part of the club’s playing and coaching staff.

Goalkeeping coach Poole joins manager Shan, assistant Beale and coach Carter in having previous affiliations with Championship club Birmingham City – serving as both a player and more recently as part of Gary Rowett’s staff between 2014 and 2016 – and boasts over 500 senior appearances during a playing career that spanned 33 years in the professional game.

He arrives having last been involved at Kidderminster Harriers, joining Turner, the new head of sports science, in doing so.

Turner, a former Shrewsbury Town scholar, has had experience of working at a higher level with Premiership rugby club Worcester Warriors and more notably with Shrewsbury Town during the Shrews’ close run-in with League One promotion in 2017/18.

Ross heads the club’s medical department as a University of Birmingham graduate, listing Stoke City, Aston Villa and Manchester United among his former employers, while Reesby makes the step-up to become the lead first-team analyst having served in similar roles at the Moors in the last three years.

The returning Lamb will be a welcome sight as the club’s kit and equipment manager having become a mainstay in non-league, serving in the same role just two years previously.

Solihull confirm that Darren Acton, Steve Hensel, Ian Hutton and Mick Kemp have all departed the club, and have thanked the quartet for their services in B92.