FOOTBALL: SOLIHULL Moors picked up maximum points against Chester of the festive period thanks to an impressive 3-0 victory at the Deva Stadium on Sunday, reports John Clothier.

After defeating their National League rivals 3-2 at home on Boxing Day, Liam McDonald’s side recorded back-to-back victories thanks to goals from Jamey Osbourne, Liam Daly and a late Harry White penalty.

The Blues started well with Danny Lewis straight into action gathering a low shot from Chappell at the second attempt and Elliott Durrell shot wide.

Richards put in a dangerous cross from the right but Alabi’s shot was deflected for a corner and Hughes was first to the cross but his effort rattled the crossbar.

Moors began to show what they are made of as they took the game to their hosts. Liam Daly struck the post with a header from a free kick but the ball bounced kindly for Jamey Osborne who coolly slotted a low drive into the corner of the net for the opening goal on 17 minutes.

Harry white beat four defenders before seeing his shot wide of the near post and was again unlucky as the half hour mark approached. Durrell broke down the right flank and found Alabi just inside the box but his shot/cross went wide of the post.

Omari Sterling James outpaced the Chester defence as he chased down the left wing and his screamer from all of 25 yards looked destined for the top right hand corner of the net until an amazing save from Lynch saved the day.

The last action of the half fell to Chester in the second minute of added time when Horwood chipped a free kick onto the upright but away to safety. 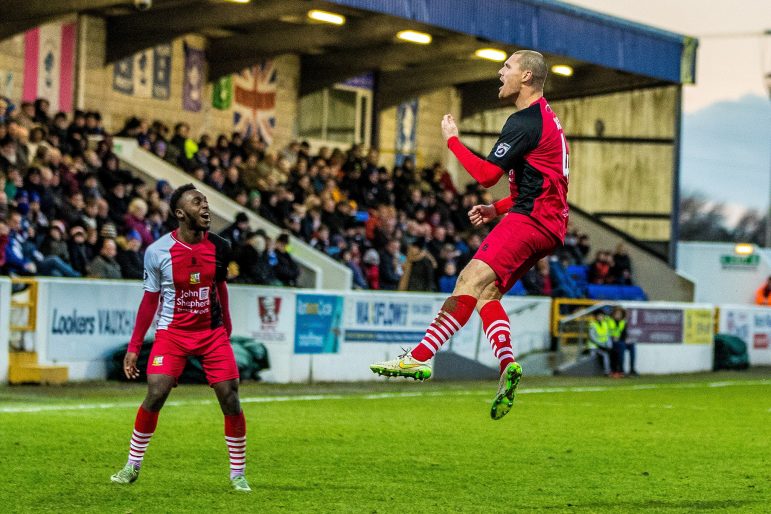 Solihull gave their hosts no time to settle as the match resumed as George Carline put White away but his shot from the edge of the box brought out another terrific save from Lynch.

However, Moors only had to wait until the 55th minute to extend their lead when Murombedzi was again brought down just outside the box. From the free kick Harry White was denied from 12 yards but the keeper’s punch went straight to Daly who vollyed home from 18 yards out.

White was so close to extending the lead almost immediately when his close range effort was blocked for a corner from which Daly out jumped the host’s defence to rattle the cross bar.

Moors were attacking in waves and a third and final goal came with 12 minutes left on the clock. A Moors corner cleared as far as Murombedzi who thumped the ball back into the box and after hitting Chester captain’s Luke George’s raised his arm, White made no mistake from the resultant spot kick to all but seal all three points.

Five minutes added time brought no respite to the beleaguered hosts although Asante could have made it four after a solo effort some 12 yards out which cleared the bar.

It takes Moors up to 15th place in the National League. They play high flying Gateshead at home next Saturday at the Automated Technology Group Stadium KO 3.00 pm.